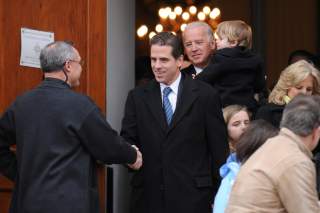 Former Vice President Joe Biden released an anti-corruption plan Monday, one day after his son Hunter Biden announced he would step down from the board of a Chinese company.

Joe Biden’s anti-corruption plan, “The Biden Plan To Guarantee Government Works For The People,” promises to “return integrity” to government decision-making and “rein in executive branch financial conflicts of interest.”

“The charge facing the president who follows Donald Trump is as big as it is essential: restoring faith in American government,” the Democratic presidential candidate’s plan reads. “The next president must demonstrate with their actions – not empty words – that public servants serve all Americans, not themselves or narrow special interests.”

“We must elect leaders with integrity, for whom the public interest is paramount. But that’s not enough,” the plan adds. “We also must strengthen our laws to ensure that no future president can ever again use the office for personal gain. The federal government’s power must be used to better the country, and not in service of narrow, private interests.”

News of Joe Biden’s plan comes after Hunter Biden announced he will be stepping down from the board of a Chinese private equity firm in a Sunday statement from his lawyer.

“To date, Hunter has not received any compensation for being on BHR’s board of directors,” the statement reads. “He has not received any return on his investment; there have been no distributions to BHR shareholders since Hunter obtained his equity interest. Moreover, Hunter played no role in directing or making BHR’s investments. Hunter intends to resign from the BHR board of directors on or by October 31, 2019.”

Trump has accused Hunter Biden of taking a trip with his father on Air Force Two to China in 2013 to obtain $1.5 billion for his fund.

“Biden and his son are stone-cold crooked and you know it,” the president said during an Oct. 2 press conference. “His son walks out with millions of dollars. The kid knows nothing.”