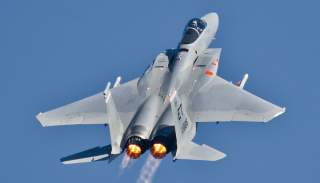 On December 21, Bloomberg Government reported that the Pentagon was planning to set aside $1.2 billion in the 2020 defense budget to procure twelve new F-15X fighters, a heavily upgraded model of the twin-engine jet first introduced into U.S. service in 1976.

If this leads to full-scale procurement, multi-role F-15Xs could replace around 250 aging F-15C and D air-superiority fighters based in the U.S., Japan and England which would either be retired or require expensive upgrades. The new Eagles would be produced by Boeing at its manufacturing line in St. Louis, which in recent years has built upgraded F-15s for export.

Earlier in September 2018, Air Force Secretary Heather Wilson told Valerie Insinna of Defense News the air force was not interested in the F-15X:

"In any of the fights that we have been asked to plan for, more fifth gen [stealth] aircraft make a huge difference, and we think that getting to 50-50 means not buying new fourth gen aircraft, it means continuing to increase the fifth generation.”

The air force believes non-stealthy F-15s and F-16s would have little survivability attempting to penetrate airspace defended by advanced air defense missiles like Russia’s S-400 system, unlike the fifth-generation F-22 and F-35.

Instead, according to Bloomberg’s sources, the F-15X order was pushed by the top brass in the Department of Defense, including both outgoing Secretary of Defense Mattis and his acting replacement, Patrick Shanahan.

Shanahan himself is a former Boeing executive, though his staff claims he has recused himself from decisions regarding Boeing purchases. Boeing scored three major new defense contracts in 2018: the T-X trainer, the MQ-25 aerial refueling drone and the MH-139 utility helicopter. If the F-15X enters full-scale production, that will guarantee Boeing another stream of manufacturing and sustainment income well into the mid-twenty-first century.

The F-15X would be built to cost-efficiently perform missions that don’t require stealth capability, and to last a long time in service. The 1980s-vintage F-15Cs (and two-seat F-1Ds) are relatively expensive to operate at roughly $44,000 per flight hour, lack ground attack capabilities, and will likely soon be retired due to the expense it would take to modernize them and extend their airframe lives.

However, Eagles have a longer range and can attain speeds 50 percent faster than new F-35 stealth fighters, making them better-suited to perform routine air-defense patrols. Short-range F-16s with weaker radars and higher accident rates would likely assume their role if the F-15Cs are retired without replacement.

Part of the F-15X’s appeal is that, unlike a brand-new airframe, it could be inexpensively integrated into the air force’s pre-existing training and logistical infrastructure for F-15s. Furthermore, Tyler Rogoway of The Drive has reported Boeing could offer the aircraft at a fairly low, fixed fly-away cost because it involves well-established technologies. Supposedly, the aircraft’s lower maintenance and fuel costs would pay back the aircraft’s sticker price within a decade’s time.

It bears noting the $100 million per plane implied by the proposed acquisition seemingly exceeds the current cost of an F-35A stealth fighter. However, it may include additional services or non-recurring expenses, or represent a higher “Low-Rate of Initial Production” fly-away cost.

The air force brass objects to the F-15X because it may draw away funding from the F-35 and an eventual sixth-generation long-range Precision Counter Air stealth fighter. The air warfare branch sees fourth-generation fighters as excessive assets that could be sent into airspace defended by modern surface-to-air missiles on Day 1 or 2 of a conflict with China or Russia. Nor would they overmatch current 4.5-generation fighters like the Su-35 Flanker-E or J-11D, and F-15Xs could be outclassed should Russia or China field significant numbers of stealth fighters in the 2020s or 2030s.

However, the F-15X could offer a path to sustainably building up “mass,” ie. generating numbers and the ability to replace losses—if it can live up to the claimed cost-efficiency. F-15s are better-suited to performing long-endurance air defense patrols than the F-35 or F-16, and could free up the pricey F-22 and F-35s for critical frontline roles. While Eagles wouldn’t be ideal for penetrating strikes in a high-intensity conflict, they could instead lug large numbers of long-range missiles outside of defended-airspace bubbles and team up with stealth fighters, which are constrained to just six to eight missiles carried internally. The stealth aircraft could creep forward, generate targeting data and pass it back via datalink to F-15 “missile trucks” to prosecute the strike—allowing them to take on more numerous enemies.

The issue of cost-efficiency is acute as the air force has declared its objective to expand from 312 to 386 squadrons despite suffering from a shortage of trained pilots and an aging aircraft inventory. A defense-spending surge in 2018 is unlikely to be long sustained. Thus, F-15Xs could offer a cost-efficient means to sustain aircraft inventory numbers and free stealth aircraft from routine missions so they can concentrate on those which require their expensive capabilities.

However, that means spending money now buying new fighters to save even more money later by paying less for their sustainment—the sort of budgetary castor oil that can be politically hard to swallow.

Bloomberg claimed the air force had “accepted” the limited F-15X fighter order, though the procurement will not be confirmed until a budget is submitted on February 4, 2019. However, the F-15X may continue to face opposition from an air force keen to replace its fourth-generation aircraft for stealth fighters as quickly as possible.