Meet the Colt Single Action Revolver: The Most Famous Gun of All Time? 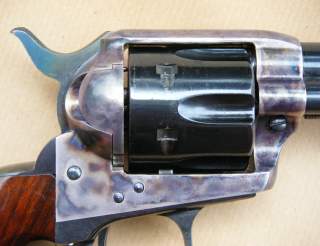 One of the most famous handguns of all time is the Colt Single Action Army revolver. Also known as the Peacemaker, Frontier Six-Shooter and the M1873, the Single Action Army is also a staple of Hollywood films, appearing in virtually every cowboy and western film ever made. The revolver was was used by soldiers and civilians alike, and is still in production more than 140 years after it entered U.S. Army service.

In the early 1870s, Colt’s Manufacturing Company developed a new revolver designed to take advantage of the newly developed metallic cartridge. Previous generation revolvers used the percussion cap method, in which pulling the trigger dropped the hammer on a percussion cap of mercury fulminate. This in turn ignited a paper cartridge containing black powder and a bullet, and the force of the black powder explosion propelled the bullet down the gun barrel.

The new metallic cartridge did away with the paper cartridge and percussion cap, instead enclosing a primer, black powder, and bullet all in a single brass cartridge. This sped up loading to a considerable degree and made ammunition much more water resistant. It also removed the step of using a built-in ramming lever to ram home the bullet and black powder to the rear of the cylinder.

The new revolver was a single action, meaning the hammer needed to be cocked back prior to each shot. This advanced the six-round cylinder to a fresh round and rotated away fired cartridges. The revolver ejected spent cartridges and reloaded fresh ones through a loading gate behind the cylinder.

One of the Colt’s most interesting features was the ability to “fan fire” the revolver. By holding down the trigger and slapping the hammer with the opposite hand, the user could make the revolver fire with each slap until the cylinder was empty. Although not particularly practical, the method added to the revolver’s popularity, particularly after it was featured in postwar Hollywood westerns.

The U.S. Army adopted the new handgun in July 1873, naming it the M1873, and bought 36,000 revolvers chambered in .45 Colt caliber. The revolver was introduced to the civilian market two months later, acquiring the nickname “Peacemaker.” In 1878, the Peacemaker was introduced in .44-40, .38-40, and .32-20 calibers, the same calibers then used by the Winchester 1873 lever action rifle. This allowed a single individual to carry both a rifle and a pistol using the same ammunition. Colt relaunched the revolver as the “Frontier Six-Shooter” and sold it for $17. The company sold 357,859 Frontiers of varying calibers between 1873 and 1941.

The M1873 was used extensively across the nineteenth century western frontier by all sides, from the U.S. Army to white settlers and even Native American tribes. Although replaced in 1892 with a new Colt double action revolver, the M1873 remained in limited service with the U.S. military, seeing action in the Spanish American War, Philippine Insurrection, and even the U.S.-Mexico border conflict of the 1910s. By World War I and World War II the 1873 was out of circulation, although U.S. General George S. Patton carried a Single Action Army revolver as his personal sidearm throughout World War II.

In addition to the standard Single Action Army the gun was offered in a handful of variants. The Colt Bisley was a target pistol that was physically identical with the exception of a low profile hammer, to make it easier to look down the sights. Colt also produced a handful of what came to be known as Buntline revolvers, which featured long barrels from 9.5 to 16 inches long. The longest barreled Buntlines were accessorized with a detachable wire stock, converting the revolver into a carbine. Firing a revolving cylinder weapon from the shoulder so close to the shooter’s ear was not comfortable, something known since the Colt 1855 Revolving Rifle, and such a shooting system never caught on.

The popularity of the Single Action Army in postwar westerns caused Colt to bring the revolver back in 1955, selling it for $125 each. Older nineteenth century Model 1873s and Peacemakers are highly prized by collectors. Although extremely dated and obsolete, Colt still produces new copies of the Single Action Army for the modern market. Only a select group of guns can claim to having been in almost continuous production across three centuries, and the Colt Single Action Army is part of that group.