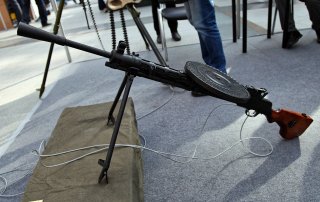 With its top-mounted pan magazine the Pulemyot Degtyaryova Pekhotny (Degtyaryov’s infantry machine gun)—better known as the DP-28—looked archaic but it proved to be a very efficient design. The light machine gun was reliable, accurate and most importantly durable. As with other Soviet small arms it could be manhandled, used in foul conditions and still work like it was new. It could, and did, endure freezing temperatures and continue to lay down fire on enemy positions when other weapons wouldn’t function.

One look at the weapon and it isn’t hard to see how it earned the nickname “the record player” as it featured a large pan magazine on the top that held 47 rounds of 7.62x54mmR ammunition, the same caliber that was used in Russian/Soviet military’s Mosin Nagant bolt action rifle. While there is no evidence that it was based on the American-designed Lewis Gun that was used by the British military during the First World War, it certainly had similarities in the design.

The DP-28 as it is known in the west, despite the fact that according to some sources it was never known by that name within the Red Army, was designed by Vasily Alekseyevich Degtyaryov in the late 1920s. Degtyaryov was one of those Soviet arms designers who had managed to survive the end of the Imperial Russian Czarist era and went on to work for the new Communist regime. He even rose to head the very first Soviet firearms design bureau.

During his lengthy career he created several types of machine guns, submachine guns and even anti-tank weapons. Degtyaryov reached the rank of Major General of the Engineering and Artillery Service, was a doctor of technical sciences and later was awarded the Hero of Socialist Labor—becoming the second recipient of that honor after Joseph Stalin!

One of his first weapons was actually the DP-28 light machine gun. But light is certainly relative, and unlike what current video games may suggest, it really couldn’t be fired easily on the move. The top loading pan magazine may seem an odd choice today, but it must be remembered that many other arms manufacturers and designers considered how gravity could aid the feeding process, which is why the British Bren Gun and other light machine guns of that era also featured top loading magazines. In the case of the DP-28 the round magazine provided plenty of ammunition but it also ensured that the line of sight over the weapon wasn’t obscured. By placing the rounds on top of the weapon it also provided mobility that was lacking in belt-fed light machineguns.

While heavier than a rifle, a single Red Army soldier could still carry and operate it—much like the Bren, Lewis or the American Browning Automatic Rifle. Weight-wise, at roughly 20 pounds unloaded/25 pounds loaded, it was a bit heavier than the BAR but around the same as the Bren. But unlike those other weapons a soldier needed to be prone or have the bipod supported on a flat service if the shooter hoped to have any accuracy at all.

The DP-28 featured a simple design with very few parts—just 80 in total in the early models—compared to other machine guns of the era. The gas operated weapon was able to fire approximately 550 rounds per minute, a lower rate of fire than some machineguns but this actually helped reduce the risk of the barrel overheating. This was important because, unlike the Bren or the German Army’s MG34 general purpose machine gun, the DP-28 didn’t feature a changeable barrel. Despite this shortcoming in combat situations, it filled the role of a squad light machinegun very well.

A far bigger issue with the DP-28 was that the magazine held just 47 rounds and changing the magazine was far from a quick process. Even worse was the fact that reloading the magazines was a slow and tedious process. DP-28 gunners typically carried the gun with a loaded pan magazine and had three more in a carrying pouch.

The weapon was updated in 1943/44 as the DPM and this version featured a more rigid bi-pod and added a pistol grip that made it easier to hold. In total only about 795,000 DP-28/DPM light machine guns were produced by the Soviets between 1928 and the early 1950s. Copies of the weapon were later produced by Poland in the early days of the Cold War while Communist China produced its own copies of the late-war DPM as the Type 53.

It was the standard Soviet infantry light machine gun during the World War II and afterwards the weapon was used in the Chinese Civil War, the Korean War and even the Vietnam War—where both DP-28s and DPMs were provided to the PAVN and VietCong forces. Examples have been seen in modern conflicts including Somalia, as well as in the ongoing civil wars in Libya and Syria and even in Afghanistan. That is a testament to Degtyaryov’s design—it is the record player that just keeps going!