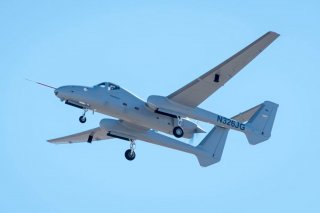 Drones and surveillance planes are each configured for specially tailored surveillance and attack missions of varying complexity, with unmanned systems typically bringing a narrower “soda-straw” type of application and manned aircraft scanning broader segments of terrain.

Intelligence, surveillance, and reconnaissance (ISR) are changing, however, as more long-endurance surveillance aircraft are being configured for networked, AI-enabled unmanned systems. These kinds of hybrid or overlapping mission sets inform the rationale for Northrop Grumman’s Firebird aircraft, a surveillance plane built as an “optionally-manned” platform. Such an engineering strategy helps engender mission flexibility depending upon mission scope and risk.

The Firebird is a medium-altitude aircraft able to fly up to 25,000 feet for more than thirty-hours. The aircraft can carry 1,700 pounds of payload and can quickly swap from a manned to an unmanned configuration, Jon Haun, Deputy Program Director, Firebird product line, Northrop Grumman, told reporters.

While the aircraft does have commercial, agricultural and civil applications, it is also combat-hardened and built for a range of military missions. As part of its military mission scope, its sensors are engineered to network with other aircraft, ground control stations and even surface ships, functioning as a “node” in part of a broader, far-reaching warfare network. As part of this, the Firebird is built for automated overwatch imaging with an AI-enabled processing engine.

Mission flexibility, including the possibility of weapons applications, multiplies the potential combat uses for the platform. Its long-endurance technology could prove useful in the Pacific, as many militaries regularly struggle with the “tyranny of distance” due to the area’s sheer geographical expanse.

The Firebird platform, and its intended mission scope, does seem to align in some ways with the U.S. Air Force’s long-term ISR strategy which seeks to network a host of platforms simultaneously to collectively gather and organize essential combat data. The Air Force program is called Advanced Battle Management System (ABMS), an integrated effort to synthesize technology, strategy and hardened combat networks for a new generation of warzone surveillance. It is, among other things, intended to widen and improve upon the mission scope historically performed by the Air Force’s Joint Surveillance and Target Attack Radar System (JSTARS) surveillance aircraft.

The JSTARS, long effective in combat in places such as Afghanistan, is a legacy platform which Air Force strategists worry may be too large, non-stealthy and technically streamlined for missions in more contested, high-threat environments. JSTARS uses Synthetic Aperture Radar, Ground Moving Target Indicator sensors, datalinks and electro-optical sensors to survey wide swaths of terrain, process information and send data to ground-based command and control centers. As a large manned, non-stealthy aircraft, the JSTARS is not particularly well-suited to operate against advanced air defenses or enemy aircraft, according to senior Air Force strategists.

ABMS, however, is geared toward a new sphere of threats. The program is not intended to rely upon a single platform but rather optimize networking and information processing to leverage the wide-spanning, yet secure, sharing of information. While there is no particular contract or announcement regarding ABMS and the Firebird, the configuration and technical architecture of the manned-unmanned aircraft does bring the ABMS mission to mind.