Meet the Future Tech the U.S. Army Wants to Use for Its Soldiers 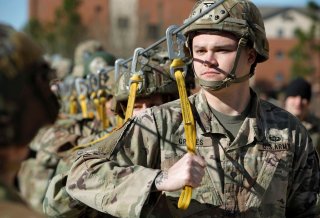 What if AI-enabled algorithms could process sensor data for Army infantry in a matter of seconds, alerting them of targets, enemy movements and relevant moments from drone feeds? Perhaps computer programs could perform real-time analytics on how combat variables compare with prior instances, giving infantry engaged in a firefight a quick range of ideal options for attack? What if a computer program can instantly offer a method of approach that is best for a specific scenario, upon analyzing a wide array of specific quantifiable circumstances?

AI-empowered programs are increasingly progressing with applications able to analyze terrain, weather, sensor data regarding enemy movements, targeting options and attack maneuvers by comparing them against a vast database to make instant calculations.

Operating within the strategic context of viewing a “soldier as a system,” the Army is now working with industry to engineer a data-integrated heads-up display to present organized combat information to soldiers in near real time.

“We have created algorithms that can recognize a human in a video feed and recognize the action they are taking. For example, we could identify someone who is raising a weapon, or determine whether someone is planting an IED or merely digging a hole,” Joe Dillon, Vice President of Soldier Solutions, Booz Allen Hamilton.

The technical challenge, Dillon explained, is to generate “real time analytics by pushing out only what the soldier needs.”

Much of the success of an initiative such as this hinges upon engineering the right technical infrastructure sufficient to “synergize,” integrate and organize data in a networked fashion. Night vision, thermal sights, radios, soldier-worn sensors and even integrated computers can all rely upon wireless connectivity in combat, presenting an immediate need to organize, analyze and distill an otherwise disparate array of incoming information.

“There is no microgrid on a soldier. Everything needs to be networked together. We are looking for a synergistic effect. Our job is to build a truly open architecture not biased toward a particular type of hardware,” Dillon said.

This type of data “fusion” already exists to varying degrees in platforms such as the F-35 which use advanced computer automation to organize information from otherwise separated sensors into a single operating picture for pilots. Navigational specifics, information from camera sensors, targeting data, altitude and speed information and threat specifics are all organized automatically for pilots to see as a way to quickly inform pilot decision making. Engineering this kind of technical apparatus for a single, integrated large platform like an F-35 may prove less difficult than networking data from individual, dismounted soldiers operating with an entire sphere of otherwise separate technologies and sensors. This is one reason why the Army and industry are looking to leverage the best available new technologies to bring soldier attack possibilities to a new level of effectiveness.