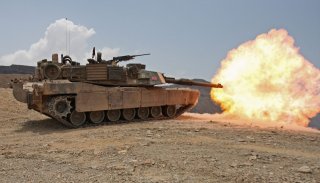 In Greek mythology, Hermes was the protector of human heralds, travelers, thieves and merchants—and he functioned as an emissary and messenger of the gods. Russia’s newly unveiled new generation of Hermes guided weapon system could send a very powerful message, as the long-range supersonic missile could destroy a western tank with an almost 100 percent guarantee.

The Shipunov Design Bureau, which is part of the High Precision Systems Company within the state tech corporation Rostec, officially introduced the new missile at Russia’s Army-2020 International Military and Technical Forum, which was held at the Patriot Congress and Exhibition Center of the Russian Armed Forces in Kubinka outside of Moscow.

“Following the results of a full cycle of the Hermes trials at the proving ground with the destruction of various types of targets, a conclusion was made that just one missile of the system will be enough to reliably eliminate any existing Western tank,” the company’s representative told Tass, adding that the destruction probability was 98-99 percent as the missile may deviate only by some fifty centimeters from the target even when it is fired to a maximum range of one hundred kilometers.

The new munitions will reportedly fly at four times the speed of sound. It could occupy a specific niche between precision munitions and artillery mission systems.

State media reported that the Hermes anti-tank guided weapon system comprises several reconnaissance and guidance drones, which can help it detect and even illuminate a target. The system also features a compact combat module with launchers for six missiles—and it can deliver salvo fire against six targets at a time. The missiles each carry a high explosive fragmentation warhead with twenty kilograms of TNT.

The Hermes can be employed against enemy armor but is also stated to be effective against command or staff vehicles, communications centers and depots. The module can be mounted on any chassis including those of armored vehicles, which could give existing platforms a bit more punch.

The Hermes, which has an autonomous missile guidance system of the fire-and-forget type, is also capable of being fired from aerial drones and naval platforms. It could be a game-changer in the anti-tank platform arena, and could certainly challenge Israel’s Spike missiles while making the American Javelin anti-tank system look downright antiquated.

Russia also announced last week that the 38th R&D and Testing Institute of Armored Hardware and Armament has released a report on how the T-14 Armata Main Battle Tank could be upgraded with a new unmanned turret and up-armed with a more powerful cannon—one that could also fire supersonic sub-caliber armor-piercing projectiles, fuel-air explosive munitions and even missiles based on the “fire and forget and fire again” principle.