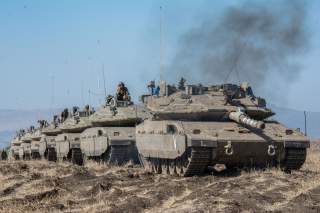 Israel is developing a new, Artificial Intelligence-equipped version of its Merkava tank that is also designed to fight in cities.

The Barak, an advanced version of the current Merkava 4 tank, is scheduled for deployment by 2021. "The Merkava Mk. 4 Barak will be the first tank to have a smart mission computer that will manage the tanks’ tasks," according to an Israel Defense Forces announcement. "This advanced artificial intelligence will reduce the team members’ workload and help them more accurately locate and strike targets."

In addition, the Barak will have upgraded sensors, networking with other tanks, and a  Virtual Reality system embedded into the tank, which the crew can access via special helmets. The VR equipment will allow the crew to perceive the environment around the vehicle, as well as conduct virtual training and mission rehearsal inside their tank rather than having to travel to a special training center.

"The helmet is called Iron View, and it will allow the combat soldiers to see the outside environment from inside the combat vehicle,” said a senior Armored Corps officer. The Barak will have systems to warn the driver of obstacles, similar to those found on luxury automobiles, as well as an active protection system (presumably the Trophy anti-missile system), an IDF commander told Israel's Walla news site [Google translation here -- and note the video]. The tank will also have improved logistics that will enable it to carry out missions that are 30 percent longer than current operations.

Most interesting is the Barak's new target. Tanks traditionally have been designed to fight other tanks, or provide support to infantry, on a regular battlefield. But the IDF has designed Barak for urban warfare, especially against insurgents such as Hamas. During Operation Protective Edge, Israel's 2014 incursion into Gaza, Israeli troops found themselves embroiled in fierce street fighting -- including Hamas fighters popping up from tunnels -- on a confined battlefield where enemy combatants and civilians were mingled.

A 360-degree Virtual Reality system would enable the crew to survey the urban terrain without having to pop their hatches -- and make themselves targets for snipers. The exact capabilities of the Barak's AI aren't clear, but artificial intelligence could help with tasks such as identifying the source of hostile fire, or distinguishing enemy combatants from civilians. Neither the IDF nor Israeli press mentioned the AI giving the Barak any autonomous capabilities.

The Merkava was first designed in the 1970s as a home-grown Israeli tank to replace the American Pattons and British Centurions used by the IDF. The latest version, the Merkava 4, was first deployed in 2004.

The 65-ton Merkava is a unique design built around Israel's needs, in particular the overriding desire to protect the crew from harm. The engine is in the front of the vehicle, which provides additional protection, while the rear has an armored compartment to carry up to eight infantry or three stretchers. The Merkava 4 is armed with a 120-millimeter cannon and the Trophy active protection system, which fires a barrage of shotgun-like shells to destroy incoming anti-tank rockets.

The IDF's Armored Corps, once the darling of the Israeli army after its blitzkrieg in the 1967 Six-Day War, has become the most unpopular branch among recruits. Coincidentally or not in light of the Barak, the Armored Corps now reports a sharp increase in recruits asking to join.