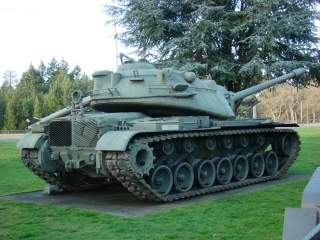 Key point: Even with its flaws, the M103 was still useful.

By 1945, the U.S. Army had cause to regret one of its most fateful choices of World War II: the decision not to build heavy tanks. Its M4 Sherman medium tank was a decent enough armored fighting vehicle when it entered combat in 1942. Yet by the end of the war, the thirty-ton Sherman had repeatedly been pulverized by heavier German tanks like the sixty-ton Tiger, which had a bigger gun and thicker armor.

The Germans and Soviets both employed heavy tanks as breakthrough vehicles, which traded speed for heavier armament and armor to enable them to penetrate fortified lines. The British had the Churchill, a heavy but slow infantry support tank to help riflemen get through German trenches.

The United States was the exception. From World War I until after World War II, the U.S. military had a requirement for a heavy tank that was never really fulfilled, notes tank historian R. P. Hunnicutt in his book Firepower: A History of the American Heavy Tank. Until the 1930s, the United States made do with British Mark VIII tanks from World War I. During World War II, only a few M6 heavies were built, and they never saw combat.

World War III was going to be different. In the 1940s and 1950s, several nations fielded heavy tanks. The Soviets, whose T-34 medium tanks had also been chewed up by German heavies, had developed the forty-five-ton JS-III and the fifty-two-ton T-10, armed with massive 122-millimeter guns. The British had the sixty-four-ton Conqueror with a 120-millimeter gun, and even the French had the AMX-50 heavy tank. The United States had fielded the forty-six-ton M-26 Pershing at the the end of World War II as a heavy tank, but it was outmuscled by the competition.

“Prior to World War II, a tank weighing 30 tons or more was regarded as heavy,” Hunnicutt writes. “But by the early postwar period, medium tanks had reached 45–50 tons and heavy tanks weighing over 70 tons were being considered.”

The U.S. Army experimented after 1945 with various heavy tank designs. But spurred by growing Cold War tensions, the Army opted to push an untested design—the T-43 heavy tank armed with a 120-millimeter gun—into production. In a story all too familiar in Pentagon arms procurement, the Army built three hundred tanks before rejecting the vehicle because of defects such as problems with the turret and gun controls, gun sight and accuracy of the 120-millimeter ammunition.

This triggered congressional hearings. “But the Army position was that the tank had been available for combat and that the modifications made were actually only refinements and improvements in design,” according to author Robert Hicks.

The solution was to modify the T-43 into a new vehicle called the M103, the first operational American heavy tank since the Mark VIII. The M103 was a sixty-two-ton vehicle with a crew of five. It had a maximum speed of just twenty-one miles per hour, and even with a 268-gallon gas tank, it only had a range of eighty miles, It was armed with a 120-millimeter M58 cannon alongside a .30-caliber coaxial machine gun, and a .50-caliber machine gun on the turret.

The M103 arrived at a time when the commander of the U.S. Seventh Army in Europe wanted a heavy tank to back up his new M48 medium tanks. “He felt that it would be desirable to have the Ml03 in Europe to overwatch the M48 tanks and that the tests should determine whether the vehicle was capable of playing that role as well as whether it possessed adequate ‘reliability in retrograde operations,’” Hicks writes.

That last point is particularly interesting, because the Germans had found that while they didn't lose many heavy tanks in combat, they abandoned a lot more during retreats: towing a broken down seventy-ton King Tiger from the battlefield was no easy task. Faced with the prospect of an overwhelming Soviet armored assault, the Seventh Army had every reason to want a heavy tank that could survive a retreat as well as an advance.

Nonetheless, the M103 still suffered from traditional heavy tank problems. “In Europe it was found that the engine was underpowered, requiring replacement of engines and transmissions after average mileage distances of only about 500,” Hicks writes. “The ammunition stowage was not convenient, repeated firing of AP ammunition caused excess chamber erosion, tracks were easily thrown, crew safety, comfort and ability to function were impaired by poor interior arrangement and the same compensating idler defect encountered on the M48 tanks was found to exist in this one.”

But even with its flaws, the M103 was still useful. “Although it was felt that the tank was sluggish, it could do the job intended,” Hicks writes.

The Army received seventy-four M103s, enough to equip a single battalion—the Second Heavy Tank Battalion, Thirty-Third Armor—in Europe. “During the service in Europe, the heavy gun tanks were well liked by their crews and they proved to be capable of being used in almost any place that the M48 series of medium tanks could be employed,” according to Hunnicutt. “The troops recognized that the powerful 120mm gun was far superior in penetration performance lo the 90mm cannon of the medium tanks.”

Ironically, while the M103 was an Army design, it was the Marine Corps that ended up with most of them. The Marines received 220 M103A1s (plus the Army's vehicles in 1963). The Marine M103 was supposed to be an interim solution until the MBT-70 tank arrived. But when the MBT-70 was canceled, and rather than take the Army’s M60 tank, the Marines added M60 components to the M103. The resulting M103A2 had a higher speed than the base model, and a range of three hundred miles.

Finally, in 1972 the Marines retired the M103 and ended up with the M60. And that was the end of America’s heavy-tank experiment. What doomed it was the same issue that has eliminated heavy tanks around the world. Post–World War II armies have shifted to the Main Battle Tank concept, in which a single model is expected to fulfill the breakthrough functions of a heavy tank while retaining the mobility of medium and light tanks.

“Such an all purpose tank required armament capable of engaging any target on the battlefield combined with enough armor to insure survival until its mission was completed,” Hunnicutt writes. “Needless to say, such a combination resulted in a heavy vehicle. However, the development of extremely powerful and compact engines improved the mobility of the later main battle tanks until it equaled that of the light tanks a decade earlier. Thus the relatively slow, heavily armored tank disappeared from the inventory of modem armies.”