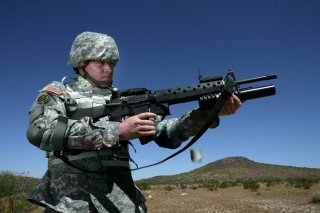 One of the most powerful weapons available to U.S. Army and Marine Corps infantry is a grenade launcher designed to fit underneath the M16 rifle.

Why, asked the Department of Defense, couldn’t a single soldier have a weapon system capable of both aimed and area fire? The M79 had a short and stubby barrel, and perhaps there was some way to mount a grenade launcher under the new M16 rifle, specifically in front of the magazine well and parallel to the rifle barrel. A weapon that used existing M79 rounds and attached to the M16 would be ideal.

The XM203—later M203—was a pump-action weapon that secured itself to a M16A1 rifle by way of a distinctive metal shroud that fit over the existing rifle handgun. The grenade launcher was loaded by pushing the barrel forward and inserting a 40 millimeter grenade into the breech. Pulling the handguard back cocked the weapon, and it was now ready to fire. The M203 had a separate trigger that launched the grenade, and a AAI-designed sight that worked with the M16 front sight post to aim the weapon. A short range weapon, it was often fired on a ballistic trajectory to hit targets at longer ranges. Six hundred XM203s were ordered for trial use in Vietnam.

A number of 40-millimeter grenades were developed for U.S. forces. The M381 and M406 anti-personnel grenades were filled with high explosive and featured serrations in the the body for fragmentation. The M381, with an arming range of 3 meters, was useful for urban combat while the M406 armed after 14 meters. The M433 High Explosive Dual Purpose round used a shaped charge warhead for use against vehicle armor but was also useful in the anti-personnel role. While the shaped charge warhead wasn’t powerful enough to penetrate tank armor it likely would have had utility against the armor of lighter vehicles such as the BTR-70 armored personnel carrier, BRDM-2 armored scout car and the flank armor of a BMP infantry fighting vehicle. The M651E1 tear gas grenade carried a payload of CS gas. Other grenades launched parachute flares, colored ground smoke, and white, green, and red flare clusters.

One of the most dangerous rounds for the M203 was the M576E1 Multiple Projectile. The M576E1 packed 20 rounds of .24 caliber buckshot. Developed for the M79, it effectively turned a grenade launcher into a shotgun with a deadly blast capable of shredding anything in its path. The M576E1 had a relatively short range but could shred anything within 50 yards downrange.

The M203 grenade launcher served the U.S. military for more than 30 years. The M203 took part in Vietnam, the invasion of Grenada in 1983, the UN peacekeeping operation in Lebanon in 1983, the invasion of Panama in 1989, operations in Bosnia, Somalia, and Haiti in the 1990s, and the 1991 Gulf War. After 9/11 iit went to war after in both Afghanistan and the invasion of Iraq. In addition to U.S. forces, it was generally adopted by any country that adopted the M16 series of weapons, including Australia, Canada, Greece, South Korea, South Vietnam, the Philippines, and (in limited numbers used by special forces) the United Kingdom.