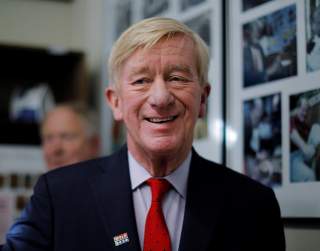 While public attention was focused on the results of the competitive Democratic primary in New Hampshire, the results of the Republican primary are not worth ignoring. A sort of two-man race developed between incumbent President Donald Trump, and his contender, former Massachusetts Governor William Weld.

Historically, New Hampshire has been the bedrock of fruitless primary challengers. Most significantly, in 1968 Minnesota Senator Eugene McCarthy won 42% of the vote, scaring the incumbent President Lyndon Johnson into forswearing reelection. In 1992, Pat Buchanan won 37.5% in the Granite state against George H. W. Bush, which predestined the latter’s defeat in the general election that year.

“The Fake News Media is looking hard for the Big Democrat Story, but there is nothing too fabulous. Wouldn’t a big story be that I got more New Hampshire Primary Votes than any incumbent president, in either party, in the history of that Great State? Not an insignificant fact!” tweeted Trump last night.

Weld began his political career in the 1980s, first as U.S. Attorney for Massachusetts, and then head of the Criminal Division of the Justice Department. While in D.C., Weld was one of the Reagan administration’s hardline drug warriors, at one point advancing the idea of using the U.S. Air Force to shoot down planes suspected of carrying illegal narcotics.

In 1990, Weld was elected Governor of Massachusetts, and in 1994 he was reelected with 70.9% of the vote, the largest margin of victory in state history. As a supporter of both abortion rights and civil unions for gay couples, Weld was a staple of liberal republicanism in the 1990s. He was the Republican candidate for senate in 1996 but was defeated by incumbent John Kerry. Weld later resigned his governorship in the summer of 1997, after being nominated by President Bill Clinton to be Ambassador to Mexico. His nomination was torpedoed by North Carolina Senator Jesse Helms, and he was never confirmed.

After an abortive run for Governor of New York in 2006, Weld reentered national politics in 2016, accepting the vice-presidential nomination of the Libertarian Party on a ticket headed by former Governor of New Mexico Gary Johnson. Weld, having previously endorsed John Kasich that election year and repeatedly flattering Democratic nominee Hillary Clinton, was a controversial pick in liberty-minded circles.

Weld rejoined the Republican Party at the start of 2019, and soon announced his presidential campaign. He engendered controversy when he claimed Donald Trump had committed treason during his phone call to the Ukrainian President, the even that lead to the impeachment imbroglio this past fall. “The penalty for treason under the U.S. code is death. That’s the only penalty,” Weld proscribed.

The former governor was not perturbed by his showing. “I’m going to declare that I’ve exceeded expectations no matter what,” Weld told The Boston Globe yesterday afternoon. Weld received 1.3% of the vote in the Iowa caucuses last week.

Bill Weld has said that after the primary process, he’d “be happy [to support] any of the centrist Democrats” in the general election, including former New York City Mayor Michael Bloomberg or former Vice President Joe Biden, who he’d vote for in a “heartbeat.”