Meet the New Satellite Connection Technology the U.S. Navy Wants on Its Ships 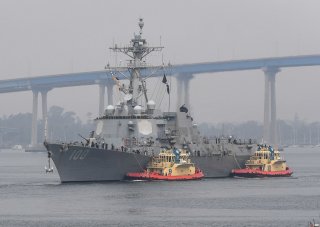 In fact, the Navy wants to be able to do all of this with networked surface, air and undersea assets in real-time.

Offensive attack maneuvers, fortified by advanced sensors and dispersed across vast swaths of ocean, is one of the tenets informing the Navy’s DMO thinking. Surface ships will, by design, increasingly operate in a dis-aggregated fashion, armed with long-range weapons and sensors.

As part of this, the Navy is taking fast steps to better network its fleet with improved satellite connectivity. GPS guidance, radio frequencies and other electronic systems making up the warfare transport layer, are vital when it comes to connecting surface platforms with satellites, and to one another.

The idea is for each platform to not only operate as an independent entity capable of combat operations but also function as a “node” within a broader warfare network.

This can include long-range, high-frequency radio communications and an ability to bounce electromagnetic signals off of aerial nodes such as drones. Additionally, the military would like to enable multi-satellite connectivity simultaneously to increase combat sensor awareness, while possibly improving targeting.

The goal, according to Isotropic CEO John Finney, is to “fuse multi-band, multi-orbit commercial and military capacity to deliver intelligence data at the tactical edge over a single platform.”

The value-added with this new technology is to enable a single, smaller-form factor, surface mounted, software-definable antenna that can emit a precise, narrowly configured electronic signal to several satellites at once—all while consuming less on-board power and increasing precision. It is a single, multi-beam antenna, which relies upon Isotropic’s new signal-forming optical lens technology, Isotropic Vice President of Development Brian Billman, told TNI in an interview.

Technically, the antenna transmission draws upon a first-of-its-kind beam-forming optical lens engineered to send precise beams to several differently placed satellites at the same time, without using the entire circuitry of the system.

While phased array antennas continue to be highly effective and widely operational, Billman explained that the new multi-beam antenna is quite different in that it can sustain its power and signal fidelity across multiple bands at the same time.

Phased array antennas, Billman said, not only rely upon a wider aperture which consumes more of the circuitry and electrical power, but decrease in power and effectiveness when broken into two beams simultaneously.

Whereas the optical lenses designed to empower the single antenna functionality do not need to all operate at the same time, yet several different beam transmissions can connect with several satellites at once. In fact, the patented beam-forming system can connect satellites of different sizes, operating at various altitudes within different orbits.

Kris Osborn is the defense editor for the National Interest. Osborn previously served at the Pentagon as a Highly Qualified Expert with the Office of the Assistant Secretary of the Army—Acquisition, Logistics & Technology. Osborn has also worked as an anchor and on-air military specialist at national TV networks. He has appeared as a guest military expert on Fox

News, MSNBC, The Military Channel, and The History Channel. He also has a Masters Degree in Comparative Literature from Columbia University. This article appeared earlier this year.