Meet the Next Generation of Battlefield Guidance Systems 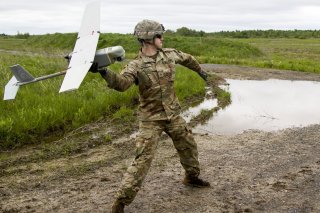 Army weapons developers are working to create guidance systems capable of withstanding technologically sophisticated jamming efforts and countermeasures from enemies hoping to throw incoming fire off course. The demand for these systems was created by the threat environment posed by major rivals to the United States, such as Russia and China. These countries are known to possess a new generation of interceptor weapons, defenses and advanced countermeasures such as radiofrequency (RF) and infrared signature jamming and offensive electronic warfare (EW) attacks. The United States needs anti-tank guided missiles, programmable ammunition and other kinds of precision attacks to “counter” these enemy “countermeasures.”

General Atomics Electromagnetic Systems (GA-EMS) and the Army Combat Capabilities Development Command Aviation Missile Center have signed a Cooperative Research and Development Agreement to refine the targeting precision and lethality of these missiles. The initiative could include the hardening of RF targeting systems for precision-guided missiles or rockets. For example, one technique being explored is called “frequency hopping,” meaning a weapon’s guidance system can switch from one frequency to another in the event that a particular frequency is jammed, occupied or disabled by an enemy. While the spectrum is finite, there are a variety of different electromagnetic frequencies and RF signals a weapon may be able to hop around from to essentially ensure that it stays its course toward its target despite operating in an environment where an enemy can use jamming and electronic warfare to deter it. “Collaborative bombing” is yet another evolving tactic. Take, for example, the Air Force’s Golden Horde program. The program consists of two air-dropped bombs autonomously coordinating targeting information through a two-way independent datalink. The two bombs help discern targets and adjust flight trajectory mid-course as needed. Artificial-intelligence-enabled autonomy is increasingly being used to overcome countermeasures or respond to moving targets and new information. It operates based on hardened datalinking between manned platforms, drones and other weapons systems.

Much of the emerging target acquisition and sensing technology is made possible through smaller form factors and greater power efficiency. Networking and computer processing plays a role too. Essentially, various types of computer processing and data sharing enable a weapon to gather targeting specifics, analyze, or even bounce off of a seemingly limitless database in seconds. Artificial-intelligence-enabled computer algorithms could be used to identify points of relevance or gather large volumes of sensor data and identify targets at a higher operational tempo. This information would then be passed along to human decisionmakers.

Additionally, target acquisition advancements can use computing to draw comparisons with previous scenarios and available weapons to “recommend” courses of action or pair sensors to shooters in a tactical situation. Also, laser systems can be used as optical sensors to help identify targets or simply pass information. Other advances will likely take shape in the form of a threat database similar to that of the F-35 stealth fighter jet, which can provide a detailed compilation of likely targets in a given geographical area. This onboard computer database, also known as a library, compares incoming sensor data to fixed or “known” information in order to identify threats and targets. Should GA-EMS be able to improve upon this kind of technology via size, weight and power (SWAP), then smaller weapons, like drones, could one day have the same capabilities.