Meet the Owen: The Weirdest Submachine Gun to Fire a Shot 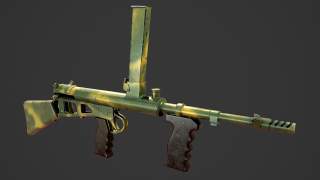 If there were a contest for the weirdest and wackiest-looking submachine gun of World War II, Australia’s Owen would win hands-down.

It looks as if the designer cobbled it together from mismatched pieces of plumbing. Rather than a parkerized finish, the factory painted the Owen gun with a lurid green and yellow camouflage pattern that resembles Shrek’s puke.

What’s more, there’s nothing “down under” about the weapon’s magazine. The magazine loads into the top of the Owen — and spent cartridges eject from the bottom of its receiver.

But there’s just one thing wrong with this picture. Despite all its oddball features, the Owen worked really, really well. It was one of the most reliable submachine guns of the war, with a track record that includes conflict in the Pacific, Korea and Vietnam.

The innovative gun is the namesake brainchild of Lt. Evelyn Owen, a member of the Australian Imperial Force who loved to tinker with firearms. But his alcoholism and poor business decisions overshadowed his inventiveness.

In 1938, Owen designed and built a homemade .22-caliber automatic carbine that had a large revolver-style cylinder — instead of a magazine — and a thumb-operated trigger.

Unfortunately, the military wasn’t interested in the contraption. Owen literally set the gun aside, storing it in a large sugar sack and went about his business as an Army private.

The Australian military brass distrusted submachine guns, putting their faith in the tried and true Lee-Enfield rifle. Besides, the generals were waiting for the Sten gun — a weapon still in development and touted by its designers to be more than adequate in battle.

But in 1940, Allied forces collapsed under the weight of the German invasion of France. As British troops fled the continent, they destroyed or simply abandoned thousands of small arms. This led to a serious shortage of weapons for the whole Allied war effort.

For the Australians, bolt-action rifles left over from World War I and hunting guns were often the only weapons available for some units.

Terrified generals in Australia knew they didn’t have enough weapons to repel a Japanese invasion force — and the Sten gun wouldn’t be production until 1941.

However, Owen had a neighbor, Vincent Wardell, who managed a large Australian steel-products factory and discovered the prototype gun in the sugar sack.

Owen’s father, embarrassed by his son’s sloppiness, explained to Wardell how the younger Owen tinkered with weapons. Wardell didn’t care whether the son picked up after himself — the simplicity of the firearm convinced Wardell that Owen was wasting his skills as a mere foot soldier.

Wardell convinced the Australian military to transfer Owen from the infantry to the Army Inventions Board, which directed the development of new weapons.

In 1942, the John Lysaght metalworks factory made three versions of the Owen gun in nine-millimeter Luger, .38–200 caliber and .45 ACP. The factory subjected each version to stress tests, along with a Thompson submachine gun and the Sten gun as benchmark weapons.

The tests included immersing the guns in mud and water, then blowing sand at the weapons. The only gun that didn’t jam … was the Owen. The top-mount magazine even proved beneficial.

Gravity helps feed bullets into the gun, and the ejection port at the bottom of the receiver means that water and gunk easily drains out of the chamber. In short, the Owen Machine Carbine — as it’s officially named — is perfect for jungle warfare.

The government wanted the nine-millimeter version, and Lysaght produced 45,000 of the weapons for the military. Australian soldiers loved them and nicknamed the weapons “Digger’s Delights.”

The Owen weighs only 10 pounds, fires around 700 rounds per minute from an open bolt — and it’s easy to handle from the prone position.

About the only disadvantage is its offset sights. The top-mounted magazine blocks a normal sight picture, so the shooter must look around the magazine. But that method only works for a right-handed shooter.

The Owen routinely out-performed the Sten gun, and soldiers liked it so much that Gen. Douglas MacArthur even considered it for American jungle forces in the Pacific.

During the Korean War, the Owen remained in the Australian arsenal. At the Battle of Kapyong in 1951, any Australian soldier who could get his hands on an Owen used one.

“All Hell broke loose as Diggers cut down the surge of attackers, directing into them as much rapid fire as their weapons could produce, the Owen submachine gun being the most effective weapon for this and the dear old single-shot Lee-Enfield the worst,” Maj. Ben O’Dowd of the 3rd Battalion, Royal Australian Regiment said in an oral history for the Australian War Memorial.

The Australians retired the Owen from mainline service in 1971. However, it still occasionally appears in the hands of special operators when they train fellow soldiers undergoing a weapons familiarization course.

Regrettably, Evelyn Owen’s life was far shorter than his odd-ball but long-lasting weapon. Owen received £10,000 in royalties — about the equivalent of $728,000 today — but sold the patent rights for the gun to the Australian government.

Owen built a saw mill with the money he received. He continued to tinker with firearms, particularly sports rifles, but he never achieved the same success he had with the Owen gun. In addition, heavy drinking took a toll on his health.

This article by Paul Huard originally appeared at War is Boring in 2015.