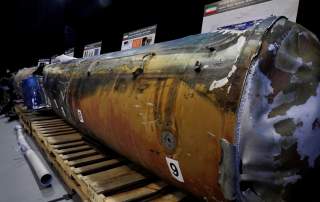 For thirty intense minutes at 1:30 AM local time, the skies over Iraq were lit by streaks of fiery light as at least sixteen ballistic missiles streaked from launch sites in Iran (video here) to target two military bases in Iraq occupied by Iraqi, U.S. and other international forces. Tehran’s promised violent retaliation for the U.S.’s killing of Iranian general Qassem Soleimani was on its way.

Five missiles raced towards a base in Erbil in northern Iraq. However, four appeared to malfunction, leaving only one to land near the target.

However, unlike oil fields in Saudi Arabia, the roughly 1,000 U.S. personnel there were not protected by Patriot air defense missile batteries designed with capability to intercept short-range ballistic missiles. According to the U.S. military, none of the incoming missiles were shot down.

At Asad the Iranian missiles landed on target, demolishing buildings and cratering a flight line. Thankfully, as ballistic missile launches are highly visible on radar, the base personnel were adequately forewarned and took shelter in underground bunkers. Thus, there were no reported casualties from either attack, contrary to Iranian propaganda claiming to have killed “80 American terrorists.”

Iran claimed it had launched ten Fateh-type short-range ballistic missiles in the attack, either 180-mile range Fateh-110s or 300-mile range variant dubbed the Fateh-313. The Fateh uses a solid-fuel rocket, which means it can be fired very promptly with relatively little preparation.

However, arms control experts swiftly identified another type of missile from missile body debris: the longer-range Qiam (“Uprising”) liquid-fuel missile, which can hit targets up to 500 miles away (or 570 miles, according to another calculation). As liquid-fuel missiles take hours to gas up, they are more suitable for offensive missions planned in advance than for firing in response to enemy attacks.

Ballistic missiles often have elaborate multi-national family trees. The Qiam is no exception, tracing its lineage back to the Scud-C ballistic missile exported abroad by the Soviet Union. North Korea reverse engineered the Scud-C into a domestic model called the Hwasong-6. Pyongyang then assisted Tehran in developing a domestic Iranian Hwasong-6 spinoff dubbed the Shahab-2.

The 10.7-meter tall Qiam-1 missile unveiled in 2010 is based upon the Shahab-2, but with the large guidance fins at the base trimmed off and a body made of lightweight aluminum instead of steel. Removing the fins both reduces weight—resulting in increased speed and range—as well as adds to the missile’s radar-cross section.

As such fins usually impart stability for the rockets, analysts believe this suggested Iran had improved its guidance to keep the missile on course without fins, relying instead on exhaust vanes at the base of the missile. A radio antenna on the Qiam is believed to receive course corrections from a GPS system installed on the launch vehicle during the launch phase.

Another innovation was the Qiam’s detachable “babby bottle” warhead cap, which is claimed to be maneuverable reentry vehicle, although analysts have express skepticism of the warhead’s agility. That explains why the jettisoned body-sections of the Qiam missiles were found relatively intact in Iraq.

Overall, the Qiam was assessed as landing on average within 500 meters of a target—an improvement over some earlier missiles, but well short of a ‘precision strike’ weapon.

Nonetheless, that’s accurate enough to land somewhere on a target the size of a military base. Iran’s ballistic missiles are controlled by the Iranian Revolutionary Guard Corps’s Aerospace Force. The Qiam specifically were seen as offering improved capability for striking the U.S. military bases encircling Iran in the Middle East region. The Qiam is a road-mobile missile, but it’s truck-based launchers are designed to be able to roll in and out of underground missile silo facilities.

Tehran apparently has mass produced the Qiam, and has extensively shared media related to it since it entered service in May 2010, starting with showcasing it in a parade in October this year. The missile’s sprawling underground launch complexes have also been featured in news segments and even in a video depicting the missile’s assembly and launch from a silo.

In 2017, Iran began using its ballistic missile force to retaliate against attacks by its regional adversaries. While shorter-range and more accurate Fateh-110 missiles took the lead role in these strikes, one or two Qiam missiles were launched alongside the Fatehs in strikes against ISIS in Syria on June 2017 and October 2018. However, both attacks were characterized by a low degree of accuracy, and third-party observers reported they did not appear to inflict any casualties.

The Qiam also appears to be identical to Burkhan-2H (“Volcano”) missiles used by Houthi rebels in Yemen, though how such a large weapon was clandestinely transported there remains unclear. The Burkan-2H was employed for repeated long-range strikes on Riyadh in 2017 and 2018.

Though less-well documented, at some point Iran introduced an improved variant dubbed the Qiam-2 (photos here)—distinguished by small guidance fins on the warhead tip of the missile (possibly the guided warhead component from Iran’s medium-range Emad missile) and the introduction of small “clipped delta” tail fins at the base of the missile.

The Qiam-2 is alleged to be significantly more accurate, though presumably that may have come at a cost in range and speed. Some sources claim that the weapons that struck al-Asad airbase were actually Qiam-2s. This may explain why—contrary to its characterization in the media—several of the missiles in that strike landed with considerable accuracy and effect on buildings in the base.

It was only by virtue that base personnel had been evacuated to underground shelters due to the early warning system that no deaths resulted, not the ostensible merciful intent of those targeting the missiles.

Tehran employed its ballistic missiles for exactly the mission they were intended for—holding assets at U.S. airbases in the Middle East at risk. Though the operation was clearly foremost of political and symbolic importance to the Iranian regime, it demonstrated Iran’s willingness to use those weapons, and that at least some were capable of landing on target. U.S. military planners will have serious grounds to consider improving air defense capabilities in the region now that these factors have been established.