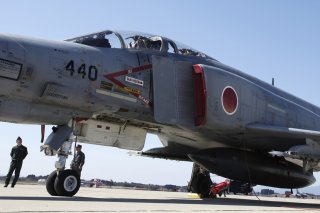 The program, originally known as “the United States Navy Fighter Weapons School,” was founded during the Vietnam War. It was born out of a little skill and foresight but mostly from rebellion and raucousness.

After graduating from the Naval Academy, Plumb, who was trained by the late Sen. John McCain, reported to Miramar Naval Air Station in San Diego. He planned to learn about the new Phantom F-4 II. However, Plumb and his flight buddy quickly learned that there would be a six-month wait.

“TOP GUN started by accident,” he said. “My buddy and I were wandering down the pipeline and saw they had F-9s, which we had already flown during training. These were the Korean War airplanes, and they were slow and not supersonic at all. But they were designed for a dogfight. So my buddy and I would save a little gas at the end of each flight and work our way up the coast of San Diego for the F-4 Phantoms to come by.”

The Phantom was tailored for the newer Cold War, with a mission to take off from an aircraft carrier at high altitudes to "shoot down the Russian bombers" before they could be seen, Plumb said.

“So what we would do is wait for them and then dogfight these guys. It was highly illegal; we weren’t supposed to be doing it. But we were just out there having fun,” he said. “Until one day, there was a note on the bulletin board for my buddy and me to report to our commanding officer immediately.”

As the then twenty-three-year-old Plumb approached the closed door still in his sweaty aviator suit, he was sure he “was toast.”

“[The Commander] was sitting behind his desk, looking at us over his eyeglass readers,” Plumb said. “Then, finally, he asked if it was us who followed an F-4 Phantom through an entire loop with guns on them the entire time because he was in that F-4.”

But rather than a story that nose-dived into a disciplinary ending, the flight leader said that he had just returned from the blood-letting jungles of Vietnam, where the “kill ratio was terrible” in fighting the enemy’s “pesky MiGs.”

“He asked us if we wanted to go out again tomorrow and fight them, and that is how the whole TOP GUN school began,” Plumb continued. “I wasn’t even called a fighter pilot; I was called an interceptor pilot. The whole idea of the TOP GUN school was to teach these interceptors to fight. So for the next six months, we would show up with an airplane with a thick wing, a lot like the MiGs we were fighting in Vietnam. It was glorious.”

The school eventually brought in top experts to train the pilots and officers on effectively engaging the enemy targets and making the best use of aviation innovation. Incidentally, it turned the kill ratio around in less than a year.

Meanwhile, Grumann’s F-9 Cougar—a carrier-based aircraft—entered the force in 1952, replacing the straight wing of the Panther with the newfangled swept wing. Similarly, the Soviet-styled MiGs had a well-crafted turn rate to encircle and shoot down an enemy aircraft effectively. The Phantoms were known for their tremendous power and speeds that far surpassed the MiGs – thus, with some forward tactical thinking, could fly over them and then down behind the tail to nail several adverse aircraft at once.

At the time, the Phantoms were considered the best fighter jets, prompting the Department of Defense to improve training rather than the tools.

Plumb ended up deploying to the heart of the Vietnam battle, where he flew seventy-four successful missions. On the seventy-fifth—just a few days before he was slated to return home—his F-4 Phantom was shot down. He spent the next 2,103 days as a prisoner of war.

The curriculum is officially referred to as the Navy Strike Fighter Tactics Instructor program, and in 1996 was moved from his Southern California roots to the Naval Aviation Warfighting Development Center aboard Naval Air Station Fallon in Nevada.

With cooperation from the Pentagon—who viewed the Hollywood touch as a recruiting opportunity—Top Gun soared onto the big screen in 1986. It has since spawned a classic cult following and the sequel is set to be released later this year.

But those going through the real-life program should dare not utter the reel-life lines. “The need for speed” doesn’t fly.

Former fighter pilot and TOPGUN instructor Cmdr. Guy “Bus” Snodgrass notes that any direct quotation from the famous film will cost you five dollars, as per the bylaws.

“When you get to TOPGUN because it is such a professional organization and you want to emphasize that you are at the top of your game,” he explains in his book, TOPGUN’s Top 10: Leadership Lessons from the Cockpit.

“That it is about professionalism, about good leadership, you don’t turn TOPGUN into a joke by referencing the movie,” Snodgrass said.

TOPGUN—at more than fifty-two years old—has changed a lot since the 1980s but still draws the best of the best. The program hones world-class skills on everything from the Raytheon-built AN/APG-79 AESA radar, the AN/ALR-67(V)3 radar warning receiver and the Advanced Targeting Forward-Looking Infrared pod to the E/A-18G Growlers, F-16 Fighting Falcons and SH-60R/S Seahawk helicopters.

“But it wasn’t really called TOP GUN until Tom Cruise came along and named it,” Plumb added. “Whatever it was called, it worked.”