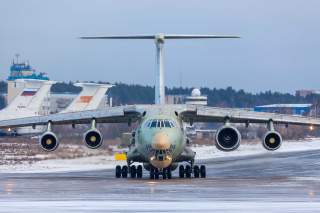 The first production-line Il-76MD-90A military transport plane had its debut flight earlier this month, on the heels of several years of technical delays. This is the first of 39 aircraft to be delivered to the Russian Defense Ministry as part of a $4 billion contract signed in 2012.

Russian President Vladimir Putin projected confidence about the deal: "This is the first, essentially new plane, that Russia's aviation industry has produced in the past 21 years." President Putin said, "I am confident that this plane will enjoy great demand here, and among our possible partners abroad."

CEO of the Ilyushin Aviation Complex Alexei Rogozin gave a timeline of the Il-76MD’s development in a social media post: ”First flight-- September 2012. First test flight in compliance with Defense Ministry specifications-- December 2016. And yesterday-- first flight of the Il-76MD-90A with the factory serial number 01-09. This is our first serially produced plane, manufactured according to the standards of the Defense Ministry.”

The Il-76MD-90A is a successor to the prolific Soviet Ilyushin Il-76, introduced in 1974 by Tashkent Aviation Production Association of Uzbekistan as a replacement for the aging Antonov An-12. The Il-76 cemented its status as the Soviet Union’s staple troop carrier during the Soviet-Afghan war, transporting hundreds of thousands of Red Army soldiers at relatively low attrition rates.

The Il-76 has since spawned dozens of variants from aerial firefighters to flying hospitals, all of them based on the same increasingly outdated frame, wing design, and engine.

Amid ongoing concerns about the continued viability of the Il-76 planes currently deployed in Syria, Oleg Felichev of the Russian defense journal VPK offers a dire assessment of Russia’s military transport fleet: “We must admit that most of the aircraft fleet was built during the Soviet era or in the ‘90s,” writes Felichev.“ these are outdated An-12, An-22, An-26, An-72, An-124 and Il-76 aircraft of various modifications. Many of them are almost exhausted.”

The Il-76MD-90 is a prominent showcase in Russia’s effort to replace its oldest Soviet-Era transport planes with refreshed models. The Il-76MD-90A first flew in 2012, but development stalled as Illyushin struggled to implement the ambitious internal redesign at acceptable manufacturing costs and quality control levels.

It was four years later that Ilyushin successfully tested the first prototype that meets Ministry of Defense specifications. According to the manufacturer Aviastar, the final design of the of the Il-76MD-90A consumes 12% less fuel than its predecessor, has a 18% higher flight range, “reduces direct operating costs,” can be operated in “high-speed airfields and high temperature environments,” complies with the International Civil Aviation Organization’s (ICAO) noise and emission standards, and requires one less crewmember at a total of 6.

These considerable gains in performance and efficiency are underpinned by the employment of four Aviadvigatel PS-90 engines, a move that is also supposed to increase service life.

The success of the Il-76MD-90A would spill over into the civil sector because, as with the  Il-76, it can be modified for civilian uses such as firefighting and emergency relief. The Il-76MD-90A is not to be confused with the Il-78M-90A aerial refueling tanker, a successor to the Il-78 that uses the same PS-90 engines.

Russia is looking for at least some return on its $4 billion investment. They are actively advertising the Il-76MD-90A to frequent buyers of Russian military hardware including China and India, even as the prior generation becomes increasingly less serviceable.

More fundamentally for the Kremlin, a transport carrier refresh is a vital investment into Russia’s capacity to project its military power over the coming decades.