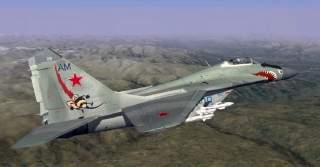 In 1989 the first MiG-29s were delivered to the 1521st Aviation Base (AvB) located at Maryy-1 Air Base (AB). This was a very special outfit within the structure of the Soviet Air Force.

In the early 1970s the top command of the Soviet Air Force decided that the valuable experience of aerial combat gained in the Arab-Israeli wars should be put to good use and implemented in all units. Also, the top command was aware that the US Air Force and the US Navy had set up special ‘aggressor’ squadrons emulating the performance of Soviet fighters and Soviet tactics in order to train their own pilots in aerial combat techniques.

Therefore it was decided to establish the Soviet Air Force own ‘aggressor’ unit. As reported by Yefim Gordon and Dmitriy Komissarov in their book Mikoyan MiG-29 & MiG-35, while this name is not to be found in any official Soviet document (after all, the Soviet Union was officially a peace-loving nation!), informally the 1521st AvB was known as the ‘aggressor’ unit among fighter jocks.

Maryy was chosen as the home base for this special unit because it offered favorable weather conditions throughout the year, enabling intensive flying training. The 1521st AvB became the proving ground where all Soviet Air Force fighter units honed their skills and passed the test for their ability to defend the nation’s airspace.

The pilots of the ‘aggressor’ unit could pride themselves on their excellent airmanship, and they were tough adversaries in mock combat. The two squadrons of the 1521st AvB were mostly staffed with Pilots 1st Class and Sniper Pilots (official Soviet skill grades); the ‘snipers’ always made up 35-40% of the lot. Flying two sorties per day, the pilots had to shoulder a high workload, and before long they no longer cared who they were up against – they were prepared to take on even the devil, or a squadron of devils!

Each fighter regiment arriving at Maryy-1 AB for a check-up had to complete the following disciplines:

-check-up of the individual pilots’ flying skills, including complex manoeuvres and aerobatics;

-dogfighting and check-up of the unit’s QRA performance; –

-tactical exercises performed by the entire regiment and individual squadrons;

-live missile launch and gunnery practice against remote-controlled target drones manoeuvring in such a way as to emulate a given type of adversary aircraft and in accordance with the current tactical situation.

(Here it should be noted that if 100% accuracy was achieved in the latter discipline the aircraft was awarded red ‘kill’ stars. Some machines carried as many as nine ‘kills’ below the canopy!)

Of course, the aircraft earmarked for the e ‘aggressor’ unit received no special treatment, being delivered in the standard camouflage scheme. This created a problem: in a group dogfight the pilots had difficulties telling friend from foe, especially if they were flying the same type of aircraft. As was usually the case, the idea of applying quick identification markings to the ‘aggressor’ aircraft arose at the ‘grass roots’ level; the commanders thought over the initiative and eventually approved it. Soon the drab colours were gone and the resident MiGs received special markings and nose art. However, this was by no means a ‘flight of fancy’ matter – indeed, a scientific approach was used! Some MiG-29s were painted up to make them resemble the McDonnell Douglas F-15 – the wingtips and stabilator tips were painted yellow with a black outline, this visually altered their shape, making them appear to be raked as on the F-15 when seen from a distance. Angled black stripes converging in a black and yellow chevron were applied aft of the cockpit, making the canopy appear longer and more similar to that of the Eagle.

As for the nose art (this was allowed, since the aircraft were supposed to represent NATO fighters), this was left up to the technicians, and each aircraft was slightly different. ’31 Red’ was probably the most colourful MiG-29 at Maryy. In addition to the ‘F-15 disguise’ it sported a sharkmouth, a so-called ‘brandy stripe’ (kon’yachnaya polosa, lit. ‘Cognac stripe’) – a yellow quick-identification stripe with stars similar to those found on brandy bottles – on the centre fuselage and the legend Aviabaza Maryy aft of the cockpit, while the fins were adorned with the badge of Squadron 1 (a winged ‘1’ superimposed on a red arrow) and a sabre-toothed tiger. The result was quite impressive!

The unit’s Squadron 2 flying MiG-23MLD ‘swing-wing’ fighters was originally due to re-equip with Su-27s, but, as it often happens, there was a last-minute change of plans and the unit soon began receiving heaps of high-time early-production Fulcrum-As from all across the nation. These, too, received special markings to assist friend-and-foe differentiation; a few weeks after being taken on charge the newcomers were recoded in an orderly fashion (the codes were again red)and adorned with artwork. The most colourful ones wore a large sharkmouth and a white triangle on the upper fuselage extending aft from the cockpit; this incorporated the base’s crest (a shield with an eagle breaking an aircraft in two) on both sides. The outer face of the fins carried the squadron badge – a hornet superimposed on a red lightning bolt – and the letters ‘AM’ (that is, Aviabaza Maryy) above it. When the unit came under Turkmenian jurisdiction after the demise of the Soviet Union, the letters were removed because in the Turkmen language am is an obscene word.

Of the 24 MiG-29s based at Maryy-1 AB, several single-seaters of both varieties and one MiG-29UB were flown to Zherdyovka AB (Tambov Region, Russia) in August 1992. In keeping with a Russian government directive most of the MiGs stationed at the latter base were transferred to the Kazakhstan Air Force in late 1995/early 1996.