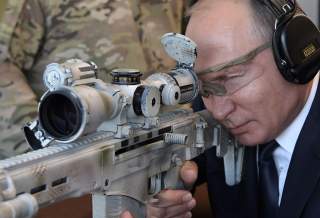 Russia has a good track record of adopting firearms that are reliable and durable. The Kalashnikov rifles and machine gun are known for their durability worldwide. But sometimes problems do occur.

Quality standards for practically everything fell during the birth of the Russian Federation in the 1990s. Even AK-74Ms that were manufactured during this period are known to have quality control issues.

At the same time, the explosion of organized crime resulted in a resurgence of submachine gun designs. Submachine guns were largely ignored during the Soviet Union following the 1940s, compact carbines like the AKMS and AKS-74U or automatic pistols took their place in most military roles.

But these weapons were often unsuitable for police work. In response to the new demand for SMGs, design bureaus churned out a myriad of different SMG designs. Some of these were successful and see use to the current day, such as the PP-19-01 Vityaz.

But many were not. One in particular, a small submachine gun called the PP-90M1, could be considered one of Russia’s worst military firearms.

The PP-90M1 was conceived as a cheaper alternative to the PP-19 Bizon, a blowback 9x19mm SMG that was based on the AK receiver. The most radical feature of the Bizon was the helical magazine, which had a very large capacity of sixty-four rounds while retaining a fairly slim profile.

But the helical magazine came with its own set of disadvantages. The Bizon’s magazine was not that reliable. It jammed often, anecdotally, almost every ten rounds. It also created balance issues by shifting the weapon’s center of gravity as the weapon expended ammunition.

This resulted in the Bizon evolving into the PP-19-01 Vityaz, which stuck to a conventional stick magazine and slightly redesigned the ergonomics of the SMG.

The PP-90M1 incorporated the helical magazine, and then tacked on plenty of other dubious design features.

The majority of parts on the gun were made of polymer to save weight and money. Instead of the proven AKS side folding stock, the gun utilized an over folding stock of dubious quality. Worst of all, instead of a traditional charging handle on the side or top of the gun, a charging “stick” was added to the gun above and coaxial to the barrel.

The switch to polymer only exacerbated the shifting center of gravity issues caused by the helical magazine due to the overall light weight of the gun. It also reduced the possibility for customization as the grip was molded into the body of the gun.

The over folding stock was meant to make the gun more compact, but it results in much worse shooting characteristics. The operator has a hard time getting a consistent “cheekweld” onto the thin stamped metal stock.

Poor cheekweld was one of the reasons the under folding stock on the AKMS was switched to a side folder in the AKS-74.

But the charging handle is the feature that pushes the PP-90M1 from “somewhat bad” to “worst” territory. To charge the weapon the operator must move their fingers very close to the barrel to push the rod back. This gives them far less leverage than a normal charging handle on the side or the top of the gun.

Later designs like the PP-2000 that utilize a charging rod add a joint to the rod that allows the rod to pivot to one side and act as a regular charging handle. The PP-90M1 makes no such provision.

If the firearm malfunctions and requires the user to cycle the action, the user would put their fingers very close to a barrel with a live round in the chamber. This is incredibly unsafe, especially if the malfunction requires more force than usual to dislodge a stuck cartridge.

One technique for applying more force with a charging handle on the side is called  “mortaring” a firearm. The operator makes sure their body is clear of the barrel and then rams the buttstock into the ground while holding the charging handle. Such a maneuver would be impossible to do safely with the PP-90M1.

Maxim Popenker, one of Russia’s leading firearms writers, gave a poor review of the PP-90M1 after he handled one in 2003. He described the sights as being too small and imprecise, the method of assembly and disassembly to be inelegant, and the cocking mechanism to be absurd.

The PP-90M1 was supposedly trialed by some police and military units in Russia, but it was only adopted in small numbers by Kazakhstan. It remains one of the worst guns to reach serial production ever designed in Russia.

What can be learned from the PP-90M1? The general movement away from helical magazines by Russian designers following the failures of the PP-90M1 and Bizon suggest that North Korea’s own helical magazines for their AKs are of dubious value, if they even function at all.