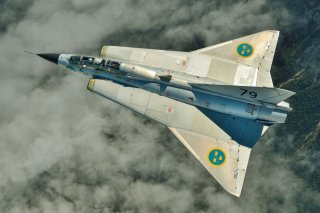 The Saab 35 was a radical Swedish design—and unlike some popular Nordic furniture, was quite robust and experienced great longevity.

Engineers at Saab had a radical idea for a new jet fighter, the Saab 35—they would use a double delta wing design (which would prove very popular at Saab). Delta wings are recognizable as large, triangle-shaped wings that are widest at the rear and taper inwards closer to the nose of the plane.

Delta wings have some beneficial characteristics. In general, delta wings have more internal volume for fuel than conventional wings. Delta wings can also be structurally stronger, though they experience higher amounts of drag compared to typical swept-wing aircraft.

The double delta design appeared promising, but extensive testing was needed. Before computer-aided testing and flight simulation was available, testing new airplane designs was a slow and laborious undertaking. Engineers made extensive use of wind tunnel tests and small scale models to test the aerodynamic effects that new airframe features would have—and the Saab 35 Draken was no exception.

Saab engineers needed double delta data in real life, and in 1952 built a small test aircraft, the Saab 210 to do so—essentially a scaled-down, but flyable, double delta wing design.

The double delta design worked. In 1952, the Saab 210 flew over Stockholm to mark the 700 year anniversary of the city’s founding.

In fact, the double delta was extremely capable. In the early 1960s, Swedish Saab pilots preformed the Cobra Maneuver, a technically challenging aerobatic display in which a rapid lift of the nose causes an airplane to fly forward perpendicular to the ground. While a pilot faces the sky, they momentarily turn the airframe into an enormous airbrake and so rapidly slow down the airplane.

Though not always applicable to combat scenarios, the Cobra Maneuver is nonetheless an indicator of high maneuverability, and demonstrated the Saab 35’s capabilities. The Saab 35 was quite capable both for its era and considering it was a single-engine jet. The fighter could fly at Mach 2 and housed one or two 30 millimeter internal cannons (depending on the variant) in addition to air-to-air missiles.

The Saab enjoyed success outside Sweden and was exported to some of Sweden’s neighboring countries—Finland and Denmark.

The United States used twelve formerly Danish Saab 35s as training aircraft until 2009. Austria too acquired several dozen unique Saab 35s. Since Austria was restricted from using air-to-air missiles by the Austrian State Treaty, they outfitted their Saabs with internal cannons for air-to-air combat. The restriction was lifted in 1993.

Though the Saab 35 was replaced by the more capable Saab 37 Viggen (which also used a modified delta wing design), the Saab 35 Draken was in use in some capacity until the mid-2000s—a run of about fifty years. Not too bad for an initially experimental aircraft.