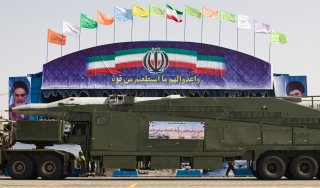 One of Iran’s more capable missile designs is the Sejjil—and remarkably it is probably produced domestically. It could potentially hit parts of Europe—and carry a nuclear warhead.

Beginning the mid-to-late-1990s, Iran began working on a medium-range ballistic missile that had a decent range and good payload. Tehran wanted a weapon that could carry both conventional high-explosive ordnance, as well as be nuclear-capable, should Iran achieve the required know-how. What came out of those design requirements was the Sejjil missile.

The Sejjil has several features that make it so deadly. First, it is road-mobile, meaning it can be transported via multi-wheeled launcher, like the kind that are seen on Red Square in Moscow during Russian Victory Day parades. Moreover, unlike some of Iran’s other missiles, the Sejjil uses solid-fuel propellant. Solid-fuel missiles can be launched much more quickly than liquid-fueled missiles, and do not require pre-flight refueling.

Additionally, Iranian state-owned media has reported some Sejjil launches as Sejjil 2 launches. It is therefore possible that there are several versions of the Sejjil missile.

According to missile experts at the Center for International and Strategic Studies, the Sejjil is likely a domestic design, which is a departure from typical Iranian designs, which have historically leaned on Soviet/Russian or Chinese components, particularly guidance systems:

“Though some speculation has tied the missile to the Chinese DF-11 and DF-15, the size and specifications of the missile suggest that the Iranian missile is unique. Unlike earlier Iranian systems, the missile does not appear to be a copy of a previously-released North Korean missile. Of course, it is highly likely that the missile project has made significant gains through foreign assistance.”

In February, Iranian media published a video of what is claimed to be an underground Sejjil production facility, presumably to better protect from Israeli or American air strikes.

Back in 2009, former U.S. Secretary of Defense Robert Gates commented on a missile test that Iran had conducted, believed to be the Sejjil. He explained that the information that he had indicated “that it was a successful flight test. The missile will have a range of approximately 2,000 to 2,500 kilometers. Because of some of the problems they’ve had with their engines, we think, at least at this stage of the testing, it’s probably closer to the lower end of that range.”

The Sejjil’s range is consistent with that estimate, guessed to be around 2,000 kilometers, or about 1,250 miles. If true, this would put Egypt, parts of Sudan, most of Ukraine, parts of southern Russia, a part of western China, India, and large parts of the Indian Ocean and Mediterranean within range.

If it would eventually be nuclear-armed, this would be a terrifying prospect—though Iran does not have any missiles that could strike the United States, and would even struggle to hit parts of Western Europe.