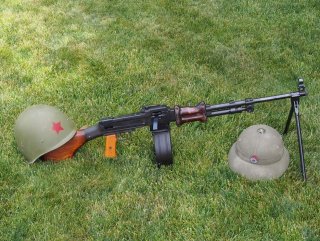 The Soviet RPD was a weapon that was ahead of its time, yet soon after its widespread adoption was quickly superseded by superior firearms. Yet in many ways it was a portent of better firearms designs in the early Cold War era.

Its history began with the development of a new cartridge for a new breed of weapons.

The German StG44 was the world’s first assault rifle—a new category of weapon denoted by the use of an “intermediate” caliber round that was smaller than the standard rifle cartridge but larger than the pistol round employed in submachine guns. In the case of the Germans this was the 7.92x33mm Kurz cartridge, and soon Soviet small arms designers created the Red Army’s own 7.62x39mm M43 round.

That cartridge would go on to be used in the infamous AK-47, but before that it was used in two weapons developed at the tail end of the Second World War. The first was the semi-automatic SKS, a weapon that vastly improved on the wartime Tokarev SVT-40, while the other was a new light machine gun developed by Vasily Degtyaryov—who had headed the very first Soviet firearms design bureau.

Degtyaryov was one of those Soviet arms designers who had managed against the odds to survive the end of the Imperial Russian Czarist era and still went on to work for the new Communist regime. During his lengthy career he created several types of machine guns, submachine guns and even anti-tank weapons. Degtyaryov rose to the rank of Major General of the Engineering and Artillery Service, was a doctor of technical sciences and later was awarded the Hero of Socialist Labor. He was actually the second recipient of that honor after none other than Joseph Stalin!

His final contribution to the Red Army was a weapon that was an improvement over his previous designs yet was far from a perfect firearm in many respects. That was the RPD (Ruchnoy Pulemyot Degtyaryova), a gas-operated, hand-held, belt-fed light machine gun. It was developed to replace his aging DP machine guns that were chambered for the full-size 7.62x54mmR rifle cartridge—which was used in the Soviet’s Mosin-Nagant bolt action rifles.

The RPD was chambered for the intermediate 7.62x39mm round and was fed from a drum that could hold 100 rounds—ensuring that the soldier who carried it had plenty of ammunition. But because the rounds were smaller, and the gun was more compact than comparable weapons of the era, even with a full load out of ammunition the RPD weighed less than the comparable Bren Gun or American M60 light machine gun.

Degtyaryov’s design was one of three prototypes considered by the Red Army, and was ready for mass production in 1944. However, due to the fact that the Soviets were still only slowly recovering from the Nazi invasion, large scale production of the RPD didn’t actually commence until 1953.

It didn’t take long for military planners to see that it wasn’t a perfect weapon however.

While it was light enough to be used as a large automatic rifle, the placement of the magazine made it hard to operate in such a manner as the ammunition could rub on the shooters arm if held like a rifle. A bigger issue was that its barrel couldn’t be changed out—a serious problem in that it could only be operated in fully automatic mode. With a rate of fire of nearly 750 rounds per minute that barrel could heat up rather quickly.

As a result, operators were trained to fire only in short bursts, as anything more than 150-round bursts for more than a few minutes could burn up the barrel. The RPD was thus an example of three steps forward and one back—a trait not uncommon with Soviet small arms.

By the early 1960s, the Red Army adopted the Kalashnikov-designed PK machine gun, and the RPD was withdrawn from first-tier units across the Warsaw Pact. However, as the Soviets had produced vast quantities of the RPD, it was supplied in large numbers to the Vietcong and used as its standard light machine gun. The RPD was also produced in China as the Type 56 and Type 56-1, and in North Korea as the Type 62 light machine gun. Even today and despite its shortcomings, the RPD remains in active service with many African and Asian nations.

The lasting legacy of the RPD is that it was the first machine gun to be chambered for an intermediate cartridge and it served as a precursor to the modern squad automatic weapon (SAW).