Meet the Su-34 Fighter-Bomber: Could Russia Sell This Deadly Jet to Turkey? 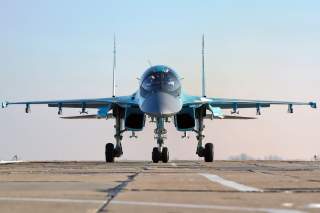 On April 10, 2019, during an interview, Turkey’s foreign minister Mevlut Cavusoglu said that Ankara could opt for additional S-400 systems, and in case the F-35 deliveries were to be hindered, Turkey might well end up with Russian aircraft soon.

Notably, there was a key detail lurked in the determined words of Turkey’s top diplomat. “If the F-35s don’t work out, I will again have to procure the jets I need from elsewhere . . . There are (Russian) Su-34, Su-57 and others. I will absolutely meet my needs from somewhere until I can produce it myself,” Mr. Cavusoglu said. Indeed, the Su-57 option has recently come into prominence among Turkish strategic community. In fact, the Russian outlet Sputnik’s Turkish language service has been persistently developing news stories, advertising the Russian Su-57 as the ultimate “fifth generation” solution for Ankara—despite serial production failures and other technical problems plaguing the aircraft.

Apart from the Su-57 part, the interview marked the very first time that someone from the administration has publicly named Russia’s Su-34 Fullback as a potential acquisition target. But why in the world would Ankara bring the Su-34, a twin-seat strike aircraft (some would call tactical bomber), to the agenda? Well, one can reasonably argue that it was a slip of the tongue although the state owned outlets, Anadolu Agency and the TRT, reiterated the Su-34 comment word for word. It is possible that the Turkish foreign minister meant the Su-35, since it is an air superiority fighter that could theoretically offer a 4++ generation stopgap, albeit a limited one, if Turkey faces tough U.S. sanctions. After all, apart from only three seconds during Mr. Cavusoglu’s recent interview, we have almost no clue about a Su-34 portfolio being discussed between Moscow and Ankara.

On the other hand, for a moment let us assume that the Turkish foreign minister has really hinted at the Su-34 option following a briefing given by the ministry’s defense experts. In such case, there can be an alternative explanation too, a speculative yet thought-provocative one.

The New Military-Geostrategic Focus of the Turkish Air Force

What are the most notable features of the Turkish Air Force’s (TAF) latest combat record? I would confidently argue that intensive air-ground missions over complex battlefields, deep-strike capabilities, long endurance, and tactical air interdiction have been the most essential priorities for Ankara in recent years. In other words, being challenged by dangerous hybrid threats emanating from Syria and Iraq, Turkey’s defense planners tend to pay more importance to gaining rapid dominance beyond borders through heavy, good old fire-power.

In the 1990s, Turkey’s top guns were the masters of dogfights over the Aegean skies. But nowadays, ground-attack and bombardment achievements get the lion’s share. At the outset of Operation Olive Branch, on January 20, 2018, the Turkish military dispatched seventy two combat aircraft —roughly 25 percent of the nation’s fighter arsenal—to engage more than one hundred ground targets. Afterwards, the TAF had sustained a demanding operational tempo and generated high sortie rates to hammer the PKK / YPG militants. The December 2018 airstrikes in Iraq set another example to understand the TAF’s new outlook. The strike package, consisting of some twenty F-16s and F-4 2020s supported by tanker aircraft and drones, penetrated into more than 160 kilometers deep Iraqi territory, and pounded the PKK terrorist organization’s bunker-type facilities around Mount Sinjar and Mount Karacak while the defense minister and Turkish military chiefs were watching the operation real-time.

Add to this the fact that many non-state armed groups in the Middle East have got their hands on advanced MANPADS (man-portable air-defense systems). Back in May 2016, for example, the PKK used an SA-18—a Russian made, third-generation advanced MANPADS—to down a Super Cobra attack helicopter of the Turkish army aviation. In result, like many other militaries around the globe, the emerging operational environment has urged the Turkish Armed Forces to alter its close air support (CAS) planning. The present understanding is centered on using less rotary-wing platforms in high-risk areas, showing more reliance on the fast-developing indigenous drone capacity, and conducting overwhelming tactical air interdiction salvos in the overture of armed conflicts, as observed in Operation Olive Branch.

When it has become clear that the S-400 acquisition would imperil the F-35 deliveries, the Turkish press’ noteworthy expert interviews essentially came up with “air-ground capabilities oriented” way-outs, aiming at refurbishing the F-4 2020 fighter bombers for a delayed retirement, boosting national armed drone capabilities, producing larger numbers of Hürkuş-C light attack aircraft; and in the meanwhile, somewhat exploring the Chinese and Russian options for the future fifth generation plans.

Turkey has its own fifth generation air superiority fighter vision too, the MMU (Milli Muharip Uçak—the National Combat Aircraft, known as the TF-X). However, the primary partner of the project, the British giant BAE Systems, has strong ties with the U.S. defense industry. Thus, it would be almost impossible to isolate the Anglo—Turkish military cooperation from Ankara’s drift with Washington, especially under the CAATSA sanctions that became a stronger possibility. Besides, even the TF-X prototype is to make the maiden flight in 2023, the centennial of the republic. All in all, the national fifth generation aircraft has a long way to go, but Turkey’s immediate threat landscape cannot wait.

Well, this is where, speculatively and hypothetically, the Su-34 might come into play. In fact, the National Interest has assembled a very informative literature on the Russian strike fighter to date. Briefly, the Su-34 Fullback depends on a pragmatic design philosophy that combines crew comfort to support hours of flight at a time, optimization for air-ground strike, and adequate air-to-air capabilities for self-escorted missions thanks to the Flanker legacy.

The aircraft can carry some 17,600 pounds, broad-array of ordnance, including cluster bombs, standoff munitions and even anti-ship missiles, on twelve hardpoints. Another advantage of the platform is its advanced electronic warfare suite that can support suppression of enemy air defenses (SEAD) missions. The latter comes as little surprise since the Russians are formidably good at electronic warfare systems. Without a doubt, the Su-34’s combat performance in Syria has polished its fame, and made it more attractive for export opportunities. Still, targeting pods seem to be a weakness for the Russian tactical aviation.

The Su-34 cannot build a future for the Turkish air power, nor could do the Soviet-style SAM-centric CONOPS. Can we see the Turkish insignia on Russia’s principal tactical bomber one day? Well, Turkey downed a Russian Su-24 about four years ago, and it is now becoming the one and only NATO nation acquiring the most advanced Russian strategic SAM system, the S-400. So, one would better get used to any surprises in the Turkish—Russian bilateral ties. Thus, prospects of a Su-34 procurement would be definitely unexpected, but not impossible. Yet again, we are eccentrically speculating about a three-seconds-long part of an interview which could well be just a slip. After all, it was not the defense minister or the procurement chief, but the FM who voiced the Su-34 Fullback. But, what if it was not just a slip of the tongue? Then, as Hamlet says, that is the question.

Turkey, whose defense economics truly reflects the characteristics of a mid-size regional pivot without the hydrocarbon gifts of the Gulf nations, can only pursue a radical inventory change through decades. However, large scale U.S. sanctions could right away bleed the Turkish military’s combat readiness since F-16s form the backbone of the TAF’s doctrinal order of battle. Ankara cannot tolerate being unable to operate beyond its problematic Middle Eastern borders. This necessity could make stopgap Russian solutions look attractive. Besides, one should note that the rapprochement between Moscow and Ankara had enabled Operation Euphrates Shield and Operation Olive Branch, the major Turkish military campaigns in Syria.

Although the Sukhoi euphoria in all kinds dazzles the Turkish press for some time, making a drastic shift and opting for totally alien Russian solutions would be easier said than done for Turkey after long experience with Western aircraft—let alone the chronic serial production problems of the Su-57. Firstly, as clearly reflected by various Flanker derivatives, Russian military aviation relies on a different design philosophy compared to NATO standards. Russian military-industrial complex prioritizes supermaneuvrability and kinematic advantages over stealth capabilities and network-centric information superiority. Secondly, one should not confuse fourth and fifth generation aircraft with small arms. A radical alteration in the fighter arsenal would inevitably necessitate doing the same in airbase infrastructure and maintenance systems, simulators, pilot training, munitions, concept of operations (CONOPS), and more importantly, military strategic culture of an entire branch. After all, how many Turkish pilots entered a Russian combat aircraft’s cockpit in the republic’s history?

Dr. Can Kasapoglu is the defense analyst of the Istanbul-based think-tank EDAM and IPC-Stiftung Mercator Fellow at the German research institute SWP. Dr. Kasapoglu holds a Ph.D. from the Turkish War College and an M.Sci. degree from the Turkish Military Academy. Previously he was an Eisenhower Fellow at the NATO Defense College in Rome and held a visiting research post at the NATO Cyber Center of Excellence in Tallinn. His works can be followed @EdamDefense