Meet the Tariq: The Old Gun (Beretta Clone) That Iraq Can't Get Rid Of 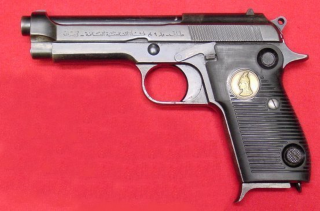 The Iraqi police and military forces field one of the widest variety of handguns in the world. From modern staples like the Glock 19, HS Produkt HS2000, and S&W M&P to relics like Saddam’s infamous Browning High Power, many pistols could lay claim to being the Iraqi national handgun. But in fact, the honor belongs to the “Tariq”, a clone of the Beretta M1951 manufactured in Iraq. While Tariq can refer to both clones of the M1951 and the Beretta 70 series, clones of the M1951 are generally more common, and the “Tariq” name generally applies to them when said without other context.

But why does the Tariq have lasting popularity with Iraqis?

A lot is probably down to availability and customizability. In an excellent video describing the history and characteristics of the Tariq, Miles Vining of Silah Report and TFB TV calls the Tariq the “Hi-Point of Iraq,” a reference to the cheap and available Hi-Point pistols in the US.

This is due to the Tariq being license produced in Iraq. In the 1980s, Saddam Hussein wanted to start producing firearms in Iraq, setting up an arms plant in Al-Qadisiyah. The plant primarily produced a version of the Yugoslavian Zastava M70 AK known as the “Tabuk,” but also produced the Tariq. Presumably, Saddam was able to buy a license for the Beretta M1951 for cheap, as Beretta had already moved on to producing the more advanced Beretta 92.

The Tariq does not make any significant changes in operation from the Beretta M1951. Mechanically, it’s a single-stack 9x19mm Parabellum pistol that relies on a rising and falling locking block to lock the slide onto the barrel. The most distinct visual change are the metal medallions inset on the grips of Tariq pistols, which depict Tariq ibn Ziyad, a commander who lead Muslim armies across the Strait of Gibraltar into Spain. “Gibraltar” itself is a Spanish derivation of Tariq’s name.

The arms plant in Al-Qadisiyah was a success, and Tabuk rifles and Tariq pistols were mass produced and standard-issue for most of the Iran-Iraq War and the following Gulf Wars. As a result, thousands of Tariqs flooded onto the black market following the collapse of the Ba’athist Iraqi government and looting of government armories in 2003.

As the Tariq is rather large for its capacity and only has an 8 round magazine, it is thoroughly outclassed by most modern double-stack handguns. However, this ensures that the price is kept low. As it uses common 9x19mm ammunition, it can be seen as an everyman’s pistol in Iraq. Tariq production was even restarted in 2009 and continues to this day as demand remains high.

The non-tilting barrel of the Tariq also allows it to be easily suppressed. Most pistols with tilting barrels like the Glock, High Power, and HS2000 require an additional component in the suppressor called a “booster” to suppress, as the additional mass of the suppressor makes the tilt to unlock the barrel require more energy. Conversely, the Tariq’s fixed barrel imposes no such limitation, allowing for simple suppressors just made of baffles to be fitted to the muzzle. This has made the Tariq a favorite of assassins and “special” troops in the employ of insurgents or various militias across Iraq.

Despite its seemingly obsolescent nature, the Tariq, Iraq’s national handgun will likely continue to be seen for a long time in the region. Continued production ensures that there will be spare parts to keep even old Tariqs running for a long time.