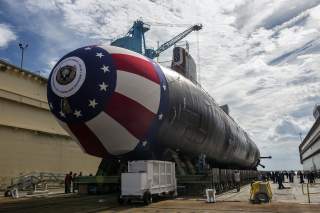 Many of these systems are in the process of being refined on board the recently delivered USS South Dakota Virginia-Class attack submarine. The boat is now poised to begin a vital part of the developmental process known as post-shakedown availability next year - a series of key assessments and final steps necessary to prep the submarine for major ocean combat.

“Design modifications will be made and then subsequently tested. Some of these design modifications are planned to be included in the fifth block of Virginia-class submarines during new construction,” William Couch, spokesman for Naval Sea Systems Command, told Warrior in a statement.

Many of these innovations, which have been underway and tested as prototypes for many years, are already operational as the USS South Dakota enters service, after being formally delivered to the Navy earlier this year.

The plan, Navy developers say, is to further refine these technical advances before deploying what many call “the stealthiest submarines ever built” in the early 2020s.

While many details of these technical advances are not available for security reasons, service technology developers have, in a general way, told Warrior Maven some of the parameters; the innovations include quieting technologies for the engine room to make the submarine harder to detect, a new large vertical array and additional "quieting" coating materials for the hull.

The idea with the so-called “acoustic superiority” plan is to engineer a US submarines able to operate undetected in or near enemy waters or coastline, conduct reconnaissance or attack missions and sense any movement or enemy activities at farther ranges than adversaries can. These advances are consistent with more recent undersea combat strategy which, in part due to technological progress, increasingly sees attack submarines as well suited for clandestine undersea surveillance missions.

Interestingly, a substantial increased emphasis in undersea reconnaissance for attack submarines, above and beyond the historically associated “attack” missions, was cited in a 1997 National Research Council essay titled “Vision of Submarine Platforms for 2035.”

“Intelligence collection: the capability for tactical and national intelligence collection over an extended period is needed to provide covert surveillance both prior to and after onset of hostilities,” the paper writes. The research seems to suggest that strategic thinking in this area anticipated and preceded the advent of these modern technologies.

“Covert Insertion” is another mission emphasis cited by the paper, a technique heavily reliant upon decreased undersea detectability. Submarines, in these instances, are able to more closely approach enemy coastline to conduct surveillance missions, scout or strike targets and “covertly” insert forces in close proximity to a conflict.

“Deployment of ground forces of various numbers, configurations and capabilities offers the advantage of determining optimum timing by covert and, if necessary, extended on-site observation of the tactical situation,” the essay “Vision of Submarine Platforms for 2035,” writes.

While the specific technical composition of new coating materials for the USS South Dakota are, naturally, not available - many submarine weapons developers and engineers are known to use specially crafted rubber tiles to absorb sonar “pings.” Also, propellers are typically designed to produce thrust at slow speeds, to minimize cavitation and decrease any underwater signature, a research paper from Livingston Research writes.

Acoustic sensor technology works by using underwater submarine sensors to detect sound “pings” to determine the contours, speed and range of an enemy ship, submarine or approaching weapon. Much like radar analyzes the return electromagnetic signal bounced off an object, acoustics works by using “sound” in a similar fashion. Most of the undersea acoustic technology is “passive,” meaning it is engineered to receive pings and “listen” without sending out a signal which might reveal their undersea presence or location to an enemy, Navy technology developers explained to Warrior in previous interviews.

While high-frequency, fast two-way communication is currently difficult to sustain from the undersea domain, submarines are able to use a Very Low Frequency radio to communicate while at various depths beneath the surface, a former senior Navy weapons developer told Warrior in an interview several years ago.

Overall, these advancements for the future submarine fleet are not only designed for new boats being built - but possibly for those already in service.

“These improvements are evaluated for future ships and potential retro-fitting into older ships,” Couch said.

Kris Osborn of Warrior Maven previously served at the Pentagon as a Highly Qualified Expert with the Office of the Assistant Secretary of the Army - Acquisition, Logistics& Technology. Osborn has also worked as an anchor and an-air military specialist at national TV networks. He has a Masters Degree in Comparative Literature from Columbia University.