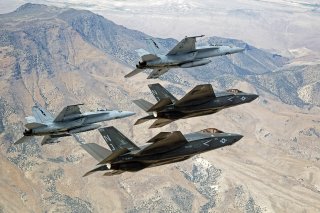 The U.S. Navy has launched a new high-tech, long-range, all-weather bomb for the first time from an F/A-18E/F Super Hornet, marking a new era of attack possibilities for carrier-launched fighters in terms of precision, range and an ability to destroy moving targets from the air.

A key part of the weapon, called Stormbreaker, is “tri-mode” seeker technology—a guidance system that can direct the weapon using a millimeter-wave radar, uncooled imaging infrared guidance and semi-active laser technology. The weapon can track and destroy targets from as far away as forty miles.

Raytheon weapons developers say the tri-mode seeker provides a range of guidance and targeting options typically not used together in one system. Millimeter-wave radar gives the weapon an ability to navigate through adverse weather, conditions in which other guidance systems might encounter problems reaching or pinpointing targets. Imagining infrared guidance allows the weapon to track and hone in on heat signatures such as the temperature of an enemy vehicle. With semi-active laser technology, the weapon can be guided to an exact point using a laser designator or laser illuminator coming from the air or the ground. One Raytheon developer told Warrior in an interview in 2018, during an earlier phase of the weapon’s development,  that “the millimeter wave radar turns on first. Then the data link gives it a cue and tells the seeker where to open up and look. Then, the weapon can turn on its IR (infrared) which uses heat seeking technology.”

“Stormbreaker is the only weapon that enables pilots to hit moving targets in bad weather or if dust and smoke are in the area. Super Hornet pilots will be able to use poor visibility to their advantage when Stormbreaker integration is complete,” Stormbreaker Program Director Cristy Stagg, Stormbreaker program director said in a company statement.

StormBreaker detects, classifies, and tracks a wide array of targets, both moving and stationary. Developers have completed a series of wind tunnel tests and finished Developmental Testing and Government Confidence Testing. A Raytheon statement also added that the bomb has “demonstrated all operating modes, the capability to send, receive, and process data-link messages via both link-16 and UHF, Raytheon developers said. “StormBreaker™ uses Universal Armament Interface protocol to make the weapon/aircraft interface compatible with a wide range of aircraft, including F-35.”

GPS- and laser-guided weapons such as Joint Direct Attack Munitions have been around for decades, however, they have primarily been designed for use against fixed or stationary targets. While the Air Force currently uses a laser-guided bomb called the GBU-54 able to destroy moving targets, the new Stormbreaker will be able to do this at longer ranges and in all kinds of weather conditions. In addition, the bomb is built with a two-way dual-band datalink, which enables it to change targets or adjust to different target locations while in flight, Raytheon developers told Warrior Maven. Stormbreaker is engineered to weigh only 208 pounds, a lighter weight than most other air-dropped bombs so that eight of them can fit on the inside of an F-35 Joint Strike Fighter, Raytheon officials explained. If weapons are kept in an internal weapons bay and not rested on an external weapons pod, then an aircraft can succeed in retaining its stealth properties because the shapes or contours of the weapons will not be visible to enemy radar.

About 105 pounds of the Stormbreaker is an explosive warhead that encompasses a “blast-frag” capability and a “plasma-jet” technology designed to pierce enemy armor. The bomb also has the ability to classify targets, meaning it could for example be programmed to hit only tanks in a convoy as opposed to other moving vehicles. The weapon can classify tanks, boats or wheeled targets, Raytheon officials added.

StormBreaker, which is also being integrated on the F-15E, is carried on the BRU-61, a four-place miniature munitions rack that fits in the F-35’s internal weapons bays. Following the successful integration of the weapon onto an F/A-18E/F, the Stormbreaker will arm the F-35B for the Marine Corps before the F-35A and F-35C.