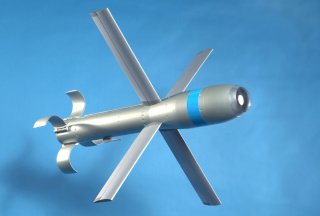 As Western militaries shift back into a conventional focus after spending more than a decade fighting insurgencies, they are bringing along some tech developed for counterinsurgency that has applications in a peer or near-peer conflict. One important innovation that is looking to change how air-to-ground support can occur is the development of a new class of “micro precision munitions”: guided rockets, bombs, and missiles that weigh around 20 kg or less. The GBU-44/B Viper Strike was one of the first of this new class of weapon. But does it have a future?

At the beginning of the Global War on Terror, the smallest precision munition available to aerial platforms was the AGM-114 Hellfire. As a result, the MQ-1 Predator with Hellfires became an ubiquitous light close air support (CAS) platform. But in this role the limitations of the Hellfire became clear. While it was light, the Hellfire was overkill for many point targets it was fired on. The High Explosive Anti-Tank (HEAT) warhead also was found to have a lackluster anti-personnel effect due to being optimized for taking out Soviet tanks, rather than infantry formations. On the other hand, the Hellfire’s warhead was too powerful for other precision targets, especially in urban environments.

The need for a better UAV munition drove the development of the first micro munitions. One of the very early ones was the GBU-44/B Viper Strike, an adapted version of the Brilliant Anti-Tank submunition. The Brilliant Anti-Tank was originally meant to be carried by a missile and dropped over formations of Soviet armor to destroy them, while ignoring “lower” priority targets such as trucks. As such, it already had advanced sensors and guidance on board, making it easily adapted for the micro munition role.

To make a BAT submunition into a GBU-44/B Viper Strike, the original BAT seeker was removed and the Alternate Semi-Active Laser (ASAL) seeker was installed in its place, which made it fully laser-guided as opposed to the IR seeker on the BAT. GPS capability was also later added to the seeker, which allowed the GBU-44/B to be fired from increased standoff to glide to the target. The directional microphones on the BAT wingtips were also removed and replaced by simple rods. Finally, the “precursor” warhead of the BAT was removed, as the GBU-44/B was not designed to strike heavy armor.

The resulting weapon was half the weight of the Hellfire and could be used on the lighter RQ-5 Hunter UAVs. It also had a smaller blast radius, enabling safe use close to enemy troops. The GBU-44/B was actually the first weapon used from an Army UAV in combat.

But lethality was a problem for the GBU-44/B and led to its eventual withdrawal from usage. Probably due to the small warhead, USSOCOM phased out usage of the weapon due to “failure to achieve lethality performance”. Northrop Grumman sold the design to MBDA in 2012. The Army retired its fleet of Hunter UAVs in 2015.

MBDA still markets the GBU-44/B under the name “Viper-E”, but it’s weapon probably won’t generate any sales. The latest press releases about the weapon are over six years old, and it is no longer displayed at trade shows. But it remains an interesting predecessor to modern micro munitions, having proved that the concept has value and can be effective on the battlefield.