Meet the Walther PPK: The Gun That Killed Adolf Hitler 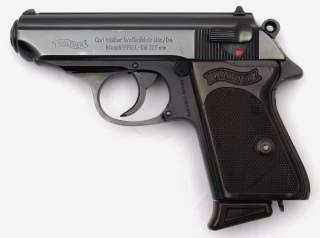 On April 30, 1945, Adolf Hitler, leader of the Third Reich, killed himself with a 7.65-millimeter Walther PPK pistol.

It is believed that Hitler owned several PP & PPKs, but the pistol he used on April 30 is long lost, possibly taken as a trophy by a Soviet soldier or kept and hidden by one of the last people to leave the Fuhrerbunkerbefore the surrender of Berlin and the final collapse of the Third Reich on May 7.

On May 1, Nazi authorities announced that Hitler had died fighting with his men and that Adm. Karl Donitz would become his successor. The bodies of Hitler and Braun were taken out of the bunker to a small garden behind the Reich Chancellery. They were doused with petrol, set alight and then hurriedly buried in a crater.

While the PPK may be infamous for its links to Nazi Germany, it’s famousas James Bond’s weapon of choice — although Bond’s first weapon was the Beretta 418. It was only when a fan suggested the PPK as a more manly weapon that Ian Fleming rearmed his famous character.