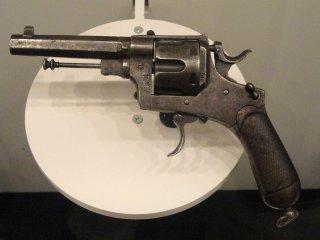 While Nazi Germany produced some fine weapons during World War II, the same couldn’t be always said of its Italian and Japanese Axis partners. In fact, both nations produced some handguns that were unreliable and even dangerous to the shooter. There is the saying “better than nothing,” but these handguns might make you think otherwise.

Here is a recap of the worst Axis handguns of World War II.

In the years leading up to World War II, the Italian military was not what could be described as well prepared for a major conflict, which is why outdated weapons such as the Bodeo Model 1889 revolver remained in use even amongst is frontline troops. Due to its odd shape of the grip, it earned the nickname “coscia d’angello” (“leg of lamb”).

The aging weapon had become the Italian Arm’'s service revolver in 1891 and was carried throughout the World War I and then in the interwar Italian colonial wars in Libya and Ethiopia. It was never declared obsolete, which is why it was still in service as a reserve weapon and remained so until the end of the war.

During its service life, the solid-frame, six-shot revolver was produced in two versions—one with a round barrel with trigger guard, and another with an octagonal barrel and folding trigger. Despite the fact that it was outdated by the outbreak of the war, the German Wehrmacht utilized the Bodeo Model 1889 revolver in a limited capacity with its military, especially as the Nazis occupied its former partner in 1943, after which stocks of captured Bodeo handguns were re-designated as Revolver 680(i).

The shortcomings of the Bodeo Model 1889 were apparent even as early as 1910 when the Glisenti Model 1910 went into production. However, it suffered from a flawed design that included a complex yet weak firing system. To compensate for the flaw, the pistol utilized a weaker cartridge than its contemporary rival handguns. The 9mm Glisenti round was similar to the German 9x19 millimeter Parabellum round, but with a significantly reduced velocity, which meant it lacked "stopping power" in combat.

Despite its flaws, the short recoil pistol, which featured a seven-round detachable box magazine, remained in use throughout World War I and World War II.

The Japanese Type 26 was another weapon that was simply outdated by the World War II —and while it wasn’t ever considered a “good firearm,” it was at least more reliable than some of the weapons to come! Due to Japanese naming conventions, it also might not sound that old, but the model number refers to the twenty-sixth year of the reign of the Meiji emperor, which was 1893.

The “hammerless” revolver was in fact the first modern revolver adopted by the Imperial Japanese Army but it used a unique version of nine-milimeter, which meant the ammunition wasn't compatible with any other Japanese weapon. Moreover, its double-action-only mechanism also meant it was far from accurate even in an aimed shot. Despite those flaws, it saw reliable service in the Russo-Japanese War and World War I; and due to production shortages for more modern weapons, Type 26 remained in use throughout World War II.

The first Japanese pistol, the Type A, was designed by General Kijiro Nambu in 1902 and updated as the Type 14, the year it entered production – the 14th year of the Emperor Yoshihito or 1926. Confusingly, both versions are often simply known as the "Nambu." While the handguns resemble the German Luger, neither the Type A nor the later Type 14 were in fact based on the German-made P08 Luger design. The Nambu instead employs a recoil spring action rather than the toggle-locked, short recoil action of the Luger.

It is worth noting too that the Nambu was never officially adopted by the Japanese military. Japanese officers were expected to purchase their own pistols, and instead, the Nambu was made available for officers to purchase. The Nambu was mainly produced by the Tokyo Arsenal, while some models were also made by the Tokyo Gas and Electric Company. Some two hundred thousand models in total—of both the Type A and the Type 14—were produced by the end of World War II.

The gun fired the 8-millimeter cartridge, which was considered under-powered compared to the other handguns of the era. Additional shortcomings included crude sights and weak magazine springs that resulted in misfires. However, the gun did catch the eye of the William B. Ruger, a U.S. Marine who went on to create the Ruger Standard after duplicating two Baby Nambus in his garage after the war.

The Type 14 was not the only Japanese pistol designed by Kijiro Nambu, who also was responsible for the 1934 designed Type 94 (based on the Japanese year 2094, which was believed to be the date from the creation of the world). It was designed to be smaller and simpler to produce than the Type 14 but still used the same 8mm rounds. The gun is known for a quite serious design flaw, which allowed for the gun to be accidentally discharged by pressing the exposed trigger bar on the left-hand side of the receiver. Countering this claim is the opinion that the safety should always be on until the gun is ready to be fired, but it seems to be a real flaw none-the-less.

Some seventy-two thousand Type 94 pistols were made by the end of the war, and quality diminished greatly during the later stages of the war, and many of these cruder versions are the ones that were brought home in large numbers by returning American GIs, adding to the mythos of the poor quality of the Japanese Type 94 pistol.