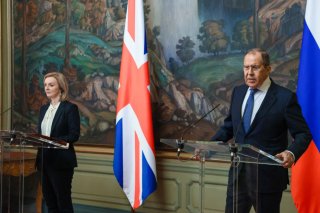 A meeting between Russian foreign minister Sergey Lavrov and British foreign secretary Liz Truss in Moscow ended poorly on Thursday after Lavrov suggested that his counterpart did not intend to negotiate in good faith.

“I’m honestly disappointed that what we have is a conversation between a mute and a deaf person,” Lavrov said of Truss at a joint news conference following the meeting. “Our most detailed explanations fell on unprepared soil.”

The Russian foreign minister claimed that the evidence that he had brought to the meeting “bounced off” of Truss.

Truss responded to Lavrov’s criticisms by accusing the Kremlin of needlessly escalating the crisis by stationing more than 100,000 Russian troops along its border with Ukraine, a threatening gesture that many experts have cautioned could be the buildup to a Russian invasion.

“I can’t see any other reason for having 100,000 troops stationed on the border, apart from to threaten Ukraine,” Truss told reporters after the meeting. “If Russia is serious about diplomacy, they need to remove those troops and desist from the threats.”

During the meeting, Lavrov allegedly asked Truss if Britain would recognize Russia’s sovereignty over the regions of Rostov and Voronezh—a trick question, as both regions are located within Russia.

Truss initially claimed that the British government would never recognize Russian sovereignty in those areas. However, the British ambassador to Moscow, who was also present at the meeting, corrected her. The foreign secretary later acknowledged that she had misinterpreted Lavrov’s question and had assumed that he was speaking about Ukrainian territory.

Britain has played an active role in the ongoing Russo-Ukrainian crisis. Earlier in the week, British prime minister Boris Johnson visited Brussels for meetings with NATO officials. At a joint press conference with NATO Secretary General Jens Stoltenberg, he highlighted the support that Britain had provided for Ukraine since the Russian seizure of Crimea and the emergence of separatist rebel groups in its eastern Donbass region in 2014.

“We have trained 22,000 Ukrainian soldiers since 2014. We have sent some anti-tank weapons, 2,000 of them, in the last two or three months. We will think about what else we might be able to provide,” Johnson said.

The prime minister added that he “honestly [didn’t] think a decision ha[d] yet been taken” on whether to attack or not by the Kremlin, “but that doesn’t mean that it is impossible that something absolutely disastrous could happen very soon indeed.”

The British government has also ordered 1,000 British troops to prepare for deployment to Eastern Europe in the event of a Russian intervention, according to Reuters.