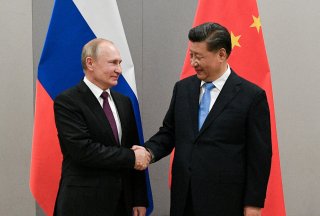 Russian president Vladimir Putin and Chinese president Xi Jinping held a virtual summit on Wednesday, praising the state of the Sino-Russian relationship and describing it as “a proper example of interstate cooperation in the twenty-first century.”

“A new model of cooperation has been formed between our countries,” Putin said at the meeting, “based among other things on such principles as not interfering in internal affairs, respect for each other’s interests, [and] determination to turn the shared [Russian-Chinese] border into a belt of eternal peace.”

The two nations’ geographic interests, as well as shared opposition to the United States, have led them to pursue closer ties in recent years. Earlier in 2021, the two leaders agreed to extend a twenty-year treaty of friendship and cooperation between their respective nations that had originally been signed in 2001. On a separate occasion, Xi described Putin as his “best friend.”

At the meeting, Xi claimed that the Russian president “supported China’s efforts to protect key national interests and firmly opposed attempts to drive a wedge between our countries.”

Left unspoken was the contention that the West, particularly the United States, had sought to divide and weaken Moscow and Beijing. The two superpowers have each experienced increasingly antagonistic relations with the United States, particularly under the administration of President Joe Biden, who has castigated it for human-rights abuses and a failure to promote liberal democracy.

Biden’s two-day Summit for Democracy, a virtual conference held last week with the attendance of representatives from more than one hundred countries, conspicuously excluded both Moscow and Beijing. The two countries jointly warned in late November that the Biden administration’s actions were representative of a “Cold-War mentality” in which the two nations were perceived as enemies rather than strategic rivals. Separately, China has attempted to defend its own democratic record, claiming that its practice of democracy is more effective than Washington’s democratic record.

In the run-up to the meeting, Kremlin spokesman Dmitry Peskov claimed that Putin and Xi would also discuss the “aggressive” rhetoric that the United States and NATO had deployed in response to the Ukraine crisis. Tens of thousands of Russian troops have massed along Ukraine’s eastern border with Russia, prompting fears of invasion in the West. Moscow has repeatedly denied that it intends to invade Ukraine and has accused the West of having ulterior motives in its perception of Russia’s actions as aggressive.

The two leaders plan to meet again in person at the Beijing 2022 Winter Olympics, which are scheduled to take place in February.