Melon of Doom: How a Nuclear Blast to Power a Space Ship Could Have Been a Super Weapon 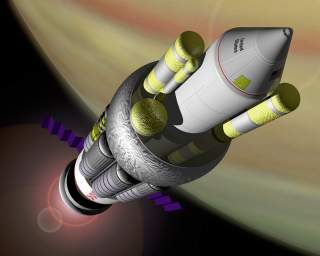 Once upon a time some brilliant men embraced a crazy idea—using atomic bombs to propel a spaceship. These men had worked on the Manhattan Project and the Hydrogen bomb, and wanted a better use for their technology. For a few years they explored how the Bomb might open the heavens.

Project Orion, as the effort was known, was one of the zaniest and most exciting projects to emerge from the Atoms for Peace program. Stanislaw Ulam, the brilliant physicist who co-invented the true hydrogen bomb, came up with the original idea of propelling a spacecraft with bombs after World War II. His idea lay dormant for a decade until Sputnik, when suddenly  the U.S. Government frantically sought ways to catch up in space flight.

Between 1958 and 1964 Project Orion’s developers demonstrated the feasibility of nuclear-pulse propulsion. They even flew a model ship which banged its way hundreds of feet into the air on the force of its explosive charges. But in the end Orion wound down because NASA wouldn’t play with bombs and the Air Force couldn’t really justify it as a weapons program.

So why are so many aspects of a sixty-year-old spaceship project still highly classified today? Because the bombs designed to propel Orion can be used for other purposes.

A nuclear-pulse propulsion system can be likened to a piston engine, except the immense force of the explosion is not contained in a cylinder but expands into space behind the vehicle. Radiation and debris from the explosion impact a heavy pusher plate—attached to the spacecraft by shock absorbers—which imparts momentum to the ship. The pusher plate and shock absorbers act like a reciprocating piston pushed by nuclear blasts.

In order to get the most energy into pushing the ship, a directed explosion is needed. A spherical blast wastes most of the energy of the propellant charge. But anti-tank weapons pointed the way towards using a shaped charge—an explosive designed to explode in a narrow direction rather than all around.

The propellant bombs designed for Project Orion were not only small and frugal with fissile material; they were nuclear shaped charges. Declassified data show that before the project’s termination physicists and engineers had worked out a nuclear explosive able to direct its blast in one direction (toward the pusher plate) within a twenty-two-degree angle.

In Orion’s last years under Air Force patronage the scientists explored various means of weaponizing their research. The propellant charge evolved into a weird and powerful weapon still cloaked in secrecy: the Casaba Howitzer. Scott Lowther, a leading authority on the device, says this:

“The Casaba-Howitzer was a real concept: a modified pulse unit that fired a jet of plasma. But instead of a jet of fairly dense plasma at a fairly wide angle, Casaba-Howitzer was to fire a lower density jet at a much tighter angle in order to serve as a weapon. Work continued well after the Orion program was terminated. And that, sadly, is about the sum total of the publicly available information on Casaba-Howitzer. Everything else about it is speculative.”

The melon-themed naming scheme that gave the weapon its strange name gives it a slightly ridiculous air but there’s nothing funny about its effects. Winchell Chung, on his extremely informative Atomic Rockets website, notes “Now, if you replace the tungsten [plate turned into propellant] with a material with a low Z [atomic weight], the plasma jet will instead have a high velocity at a narrow angle (‘high velocity’ meaning ‘a recognizable fraction of the speed of light’) The jet angle also grows narrower as the thickness of the plate is reduced.”

Result? A nuclear spear of plasma and radiation hitting the target at relativistic speeds—unstoppable, indefensible, lethal. And since Orion needed thousands of affordable propellant charges, Casaba Howitzers could be relatively cheap and plentiful.

A space enthusiast who goes by the handle “Matter Beam” did some math on the potential lethality.  “[T]he Casaba Howitzer,” he writes, “is an extremely destructive weapon, with the larger models able to strike at distances usually reserved for lasers. Even a small Casaba Howitzer is effective at up to several kilometers, using technology tested in the 1980s. Larger, more modern devices can strike at greater distances. Futuristic devices will reach particle velocities of about 10000km/s, so time to target is negligible.”

In the decades since Orion closed down occasional hints of ongoing development have emerged. During the Reagan administration at least one nuclear test explored the concept. The “Chamita” underground blast at the Nevada Test Site on August 17, 1985, accelerated a one-pound tungsten-alloy plate to seventy kilometers per second. Only 5 percent of the bomb’s energy, it was found, went onto pushing the vaporized metal.

So we know that America once worked out a nuclear spear and has continued to develop it over the past half-century. And that’s about all we know about the Melon of Doom. May we never learn the details the hard way.