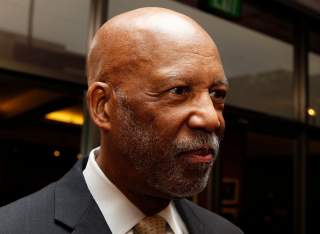 When a school system draws racial boundary lines and denies entry to qualified students on the basis of race, it doesn’t matter if it’s done in the name of segregation or so-called diversity—it is still wrong, according to one prominent civil rights advocate.

Terrence Roberts, a member of the original “Little Rock Nine” who entered a segregated Arkansas high school under National Guard protection in 1957, appeared in front of a Connecticut parents union Dec. 5, criticizing the local Connecticut school board for instituting blatant racial quotas in its magnet school programs.

Roberts, who has served as a professor of psychology at UCLA and a consultant, focused his ire on a Connecticut state law that mandates a minimum of 25% white and Asian students in the Hartford magnet schools.

“Here in Connecticut, by lumping together whites and Asians, blacks and Hispanics, that’s playing a giant game of ‘Let’s you and him fight,’” he said in an interview with Gwen Samuel, the lead plaintiff in a court case challenging the racial quotas.

The Connecticut school board justifies these quotas in the name of integrating the school systems. It points to a 1996 court case called Sheff vs. O’Neill that ordered the Connecticut education system to provide better opportunities for black students, thus sparking the construction of these magnet schools as integration devices.

A state commission designed to enforce the Sheff decision established as a goal that 41% of Hartford students would be in “integrated” environments by 2013, which it defined as being at least 25% white and Asian. Without meeting that quota, a magnet school could be subjected to demagnetization and loss of funding.

This has created a local controversy over which races “deserve” the limited spots in these magnet schools, which are widely viewed as gateways out of poverty. Roberts views this competition with distaste, having seen what this kind of identity politics has done in the past: strengthen constituents’ dependence on the people in charge.

“People don’t often realize this, but the powers that be pull the strings,” he said. “As long as they can have you battling it out, they have total satisfaction, because they don’t have to go in and beat you up.”

Members who attended Roberts’ lecture were inclined to agree. RJo Winch, a former Hartford city councilwoman, disputes the notion that the court order under Sheff vs. O’Neill expanded state authority to the point where they could arbitrarily deny entry to applicants to local magnet schools on the basis of race.

“Sheff. vs. O’Neill was about letting parents who wanted to send their kids to another school attend another [school],” Winch says, adding that the lead plaintiffs themselves simply wanted to have better options for their schooling—not necessarily a mandate for diversity quotas.

The Connecticut Supreme Court even admitted that lagging educational achievement was mostly a function of poverty, not race. This leaves the question: Why the zeal to integrate based on race specifically? Why the push for more suburban white people in these magnet schools, when it’s really the underserved black communities in Hartford that need the schools more?

Indeed, there is something particularly uncomfortable with the board’s insistence that these gleaming magnet schools be built for the purpose of attracting white people, as if merely being around white people would improve the lives of these low-income black students, who are presumably suffering from much greater problems than the lack of white people in their classroom.

Roberts is certainly skeptical of this “white osmosis” theory, calling it demeaning to the ability of black students to form their own habits of excellence. He even pointed out imperfections in the landmark Brown vs. Board of Education civil rights case for focusing its reasoning too much on the need for black students to be around white students to succeed.

“I think what happened with the Brown decision was somewhat problematic, because there was a great deal of emphasis put on the need for black people to feel better about themselves by being put in classrooms with white kids,” he said. “The real issue has always been resources, material resources, opportunities.”

And in Connecticut, such resources are being denied to these black and Hispanic kids to satisfy an arbitrary diversity quota.

Roberts called for vigilance against those who claim they are on your side but engage little with the actual community that they purport to represent.

“There are people out there who are doing white ally training,” he said. “I can just sense people going for the ally training and feeling good … they go home to suburbia and they got a certificate on the wall: ‘I was trained, I’m an ally.’”

But then he adds: “In my mind, it is not that we have a problem, and we need allies to help us. No, it’s that the country is sick, it is diseased, and we all need to come together and figure out how to find a remedy to make it work.”