Memorial Day: Honor Those Who Served From Puerto Rico By Supporting Statehood 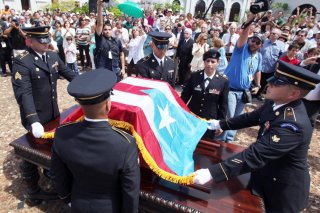 This and every Memorial Day, we honor and mourn the service members who have fought and died for this country while serving in the United States Armed Forces. Unfortunately, not all of our service members are treated equally. This Memorial Day, our elected officials should honor those who have fought and died under the American flag, but lived as second-class citizens because they are from Puerto Rico, by supporting Puerto Rico statehood.

In every war since World War I, Puerto Ricans have served alongside those from the mainland during wartime and peace, all under the same stars and stripes. They serve in every branch of the military, throughout every rank. On the front lines, Puerto Ricans treat their fellow Americans like brothers and sisters, and the differences between them fade.

Unfortunately, when they return home, the differences become brutally apparent.

Puerto Ricans have no representation in the Senate, and instead have a singular non-voting member in the House, who can introduce bills and vote in committee, but cannot vote on the House floor. This means that if the legislation regarding Puerto Rico’s status ever comes to the House Floor, no representative from the island can vote for or against the bill. To add insult, particularly for service members, Puerto Ricans cannot vote for president. So those that serve or have served in the military do not have the option to vote for their commander-in-chief, unlike those who served from the mainland.

Additionally, Puerto Rico’s status as a territory hurts the island’s economy, since their status is constantly up for debate, businesses do not have the certainty they need to set up shop long term. This means that those returning from service on the island have much less economic opportunities than the other American citizens they fought alongside.

Fortunately, there is something Congress can do to finally right this wrong, and honor those Puerto Ricans that have fought and died for the United States. And that is to respect the will of the Puerto Rican people who have voted in favor of statehood three times in less than a decade. In 2012, the majority of Puerto Rican citizens voted in opposition to the island’s current territorial status. And when asked which status option they would prefer, over 60 percent chose statehood.

Most recently, in November 2020, Puerto Ricans were asked a simple question; whether Puerto Rico should be admitted as a state immediately. The majority of Puerto Rican voters responded “Yes.” Statehood is the only status option that a majority of voters have ever supported, and it is well past time Congress honors the voice and vote of the U.S. citizens in Puerto Rico.

To do that, Congress should pass the Puerto Rico Statehood Admission Act (H.R. 1522). It is unconscionable that Puerto Ricans can fight and die for our country, but are not given the same rights they are fighting to preserve. But this Memorial Day, there is still time for Congress to do the right thing for Puerto Rican veterans, and the rest of those living on the island.

Dr. Eugenio Matias Perez is an Army infantry veteran and still serves in the Army Reserves as a Staff Sergeant. In his civilian work, he is a professor at the Puerto Rico Institute of Technology. He is a community leader and lives in Adjuntas, a town in the central mid-west of Puerto Rico. Follow him on Twitter @dreugeniomatias.