Merkel's Successor Will Pick Up Where She Left Off With Russia 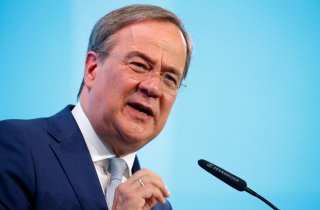 Although Chancellor Angela Merkel prepares to retire after the end of her fourth term in September this year, there is a strong chance her policy toward Russia will live on. Her anointed heir, Armin Laschet, the new leader of the center-right Christian Democratic Union (CDU) and the incumbent North Rhine-Westphalia premier, remains the frontrunner to succeed her. Laschet, who largely shares her diplomatic line, represents continuity for EU-Russia relations in the post-Merkel era.

The political class in Germany today has few illusions about Russia. In 2014, Merkel led the EU’s response to Russia’s annexation of Crimea and its involvement in the war in Donbas. She was uncompromising in calling out President Vladimir Putin’s disregard for international law and worked tirelessly to build consensus across the EU for sanctions against Moscow—at the expense of German businesses with ties to Russia. She was also instrumental in initiating the Minsk peace process aimed at resolving the conflict in eastern Ukraine.

Notwithstanding the resumed construction of the controversial Nord Stream 2 natural gas pipeline, relations between Russia and Germany have deteriorated sharply over the past year. The medical treatment of dissident Alexei Navalny in Berlin and the discovery of his poisoning by means of a Novichok nerve agent provoked an inflamed reaction from Moscow. Moreover, the bilateral relationship was strained recently by further cyberattacks against German legislators and government institutions, as well as by a contentious murder trial of a Russian accused of assassinating an exiled Chechen in a Berlin park.

In all likelihood, Germany-Russia relations will follow the same trajectory in years to come. Laschet, a Merkel loyalist, won the leadership of the dominant political party in the Bundestag earlier by expressing his readiness to continue the moderate policies of the past decade. Despite making several questionable comments previously and being labeled by some critics a Putinversteher, the new CDU leader can hardly be considered a Russia appeaser. He intends to maintain Merkel’s pragmatic outlook toward Russia, criticizing the Kremlin for human rights abuses without sacrificing economic interests. In a recent foreign policy speech, the “Merkelian” candidate said he “wouldn't change a thing” about the current government line toward Moscow.

Laschet sees Russia as both an adversary and a partner for the EU. He seeks cooperation with Moscow in certain contexts but he warns that “where international rules are violated, Russia must also be shown where the line is.” He supports keeping sanctions on Russia in place and criticizes the jailing of Navalny while professing the need for more dialogue between Moscow and Berlin on major issues of mutual concern, especially climate change. The cheerful Rhinelander views Nord Stream 2 as a commercial project that will allow Germany to bridge its energy transition. However, he said the pipeline could be halted at any time if the Kremlin uses it for geopolitical purposes or cuts off the transit of natural gas through Ukraine.

Public opinion polls show that the Union faction, made up of the CDU and the Christian Social Union (CSU) in Bavaria, consistently holds a plurality of support from roughly a third of Germans. The odds-on favorite to become the next chancellor, Laschet has established himself as a calm, risk-averse politician who is open to advice, willing to make compromises in coalition negotiations, and capable of mediating disputes among polarized factions. The upcoming federal election in Germany is unlikely to alter the course of EU-Russia relations, as Merkel’s probable successor will maintain her cautious and balanced approach to dealing with Putin.

Arik Burakovsky is Assistant Director of the Russia and Eurasia Program at The Fletcher School of Law and Diplomacy at Tufts University. His research interests include the political role of the international media, public and elite opinion, soft power, public diplomacy, and U.S.-Russia relations.