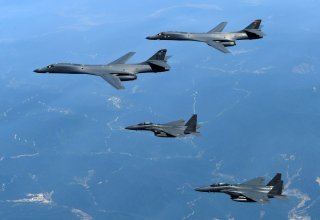 The United States Air Force has announced that around two hundred Airmen and four B-1B Lancer bombers aircraft assigned to the 7th Bomb Wing at Dyess Air Force Base (AFB), Texas, have been deployed to Ørland Air Force Station, Norway, in support of a Bomber Task Force (BTF) deployment. Such strategic bomber missions are to provide theater familiarization for the aircrews and support personnel while providing opportunities for U.S. military integration with NATO allies and regional partners.

“This BTF accomplishes objectives from the strategic to tactical levels,” said the 9th Expeditionary Bomb Squadron director of operations via a statement. “At the tactical level, the 9th EBS is executing the Department of Defense’s (DoD’s) vision of Dynamic Force Employment, while also cultivating and growing relationships with our allies and partners in Europe.”

This is the third BTF deployment conducted by the 9th EBS. Additionally, it marks the first time that the U.S. B-1B Lancers have operated out of Norway. Training with the Royal Norwegian Air Force in the European Theater and throughout the Arctic will help further provide extensive and critical experience for the aircrews while allowing both forces to conduct specific and thorough training missions.

“We will integrate with Norwegian aircraft for the entirety of this deployment and will be practicing high-end conflict scenarios and, perhaps, even developing future tactics, training and procedures,” said Lt. Col. Ryan Stallsworth, 9th EBS commander. “The 9th EBS will learn a lot from our gracious hosts, especially in terms of how to effectively operate in the High North.”

These missions further provide the training necessary to respond to any potential crisis or challenge across the globe.

“I’m looking forward to showcasing our ability to operate out of this new location and get after the mission in fresh environments,” said Gen. Jeff Harrigian, U.S. Air Forces in Europe-Air Forces Africa commander. “Training with allies like Norway enables us to hone our deterrence and defense capabilities while also enhancing regional stability.”

As Norway announced new coronavirus restrictions in January as part of an attempt to stop a third wave of cases, all U.S. Air Force personnel were medically screened prior to travel and immediately entered a “restriction of movement” upon entering the country as part of coronavirus public health measures.

It isn’t just Norway where some B-1Bs have been headed, however. While the BTF mission to Norway certainly highlights that the platform remains a crucial part of the U.S. Air Force’s fleet, it was also announced in February the service will begin divesting seventeen B-1B Lancers from its current fleet as authorized by the National Defense Authorization Act.

The U.S. Air Force has stated that the action will not affect the service’s lethality or any associated maintenance manpower. It will allow officials to focus maintenance and depot-level manpower on the remaining aircraft, increasing readiness and paving the way for the bomber fleet modernization ready to meet future challenges.

“Beginning to retire legacy bombers, to make way for the B-21 Raider, is something we have been working toward for some time,” said Gen. Timothy Ray, commander of Air Force Global Strike Command. “Due to the wear and tear placed on the B-1 fleet over the past two decades, maintaining these bombers would cost tens of millions of dollars per aircraft to get back to status quo. And that’s just to fix the problems we know about. We’re just accelerating planned retirements.”

The U.S. Air Force announced that seventeen B-1B aircraft will be retired from the current fleet of sixty-two B-1s, which will leave forty-five in the active fleet. Of those seventeen B-1 aircraft, four will be required to remain in a reclaimable condition that is consistent with Type 2000 recallable storage. Significant efforts have been made to update and upgrade the remaining aircraft over the past year.