Michael Flynn Withdraws Guilty Plea: 'I Am Innocent of This Crime' 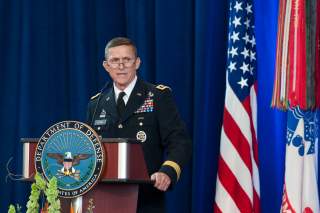 Former national security adviser Michael Flynn on Wednesday denied lying to the FBI during a Jan. 24, 2017, White House meeting, and said he regrets pleading guilty in the special counsel’s probe.

“I am innocent of this crime, and I request to withdraw my guilty plea,” Flynn said in a declaration submitted Wednesday in his case.

Flynn pleaded guilty Dec. 1, 2017, to making false statements to the FBI about his phone conversations in December 2016 with then-Russian ambassador Sergey Kislyak. As part of the plea deal, Flynn said he lied about discussing U.S. sanctions with Kislyak.

Flynn reiterated his guilty plea at a sentencing hearing on Dec. 18, 2018, but pulled out of that court appearance after Judge Emmet Sullivan indicated he was about to hand down a sentence that included jail time.

Months after the hearing, Flynn fired his lawyers and hired a new legal team that has mounted an aggressive challenge of the government’s case. On Jan. 7, prosecutors recommended that Flynn receive up to six months in jail in his case. Flynn’s lawyers responded Jan. 14 by formally requested Flynn be allowed to withdraw from his plea agreement.

In Wednesday’s declaration, the first that Flynn himself has submitted in his case, he denied lying to the FBI during the White House meeting, which was set up by then-Deputy Director Andrew McCabe.

“When FBI agents came to the White House on January 24, 2017, I did not lie to them. I believed I was honest with them to the best of my recollection at the time,” Flynn said.

“I still don’t remember if I discussed sanctions on a phone call with Ambassador Kislyak nor do I remember if we discussed the details of a UN vote on Israel.”

Flynn describes in the declaration that he ultimately pleaded guilty in his case after the special counsel’s team began a “sudden and intense” pressure campaign in November 2017 to force him to accept a plea deal.

Flynn said his attorneys at the time told him he could be facing up to 15 years in prison if he did not cooperate. He also said prosecutors were threatening to bring charges against his son, Michael Flynn Jr., on charges related to their work in 2016 for a Turkish businessman linked to the Turkish government.

“After I signed the plea, the attorneys returned to the room and confirmed that the [special counsel’s office] would no longer be pursuing my son,” Flynn said.

Sullivan, the judge handling Flynn’s case, said Jan. 24 that Flynn will likely have to testify under oath as part of the process of withdrawing from his plea deal. Flynn’s sentencing date is scheduled for Feb. 28.

In response to the Flynn legal team’s filings, prosecutors stood by their recommendation from Jan. 7 that Flynn receive a sentence between zero and six months in jail. But they slightly revised the recommendation by saying the government “does not oppose the imposition of a sentence of probation.”