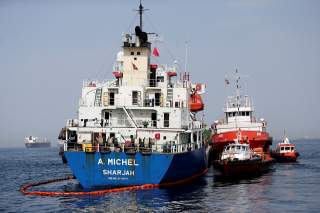 The Kingdom of Saudi Arabia claims that drones attacked an oil pipeline on Tuesday, causing a severe fire that disrupted oil operations.

The attack is just one of many recent assaults on oil industry in the region, coming not long after four oil tankers were sabotaged while anchored in the Mideast.

Yemeni rebels are claiming responsibility for a drone attack, and Saudi officials report that two oil infrastructure sites near the capital of Riyadh were targeted at the time of the pipeline attack.

In regards to the Saudi, Norwegian and Emirati oil tankers that were attacked, US military assessment indicated that Iranian-affiliated agents used explosives to blow holes in the ships.

According to the New York Post, the US Navy’s 5th Fleet, which patrols the region, has repeatedly declined to comment.

Several B-52 bombers and the USS Abraham Lincoln carrier strike fleet were recently deployed to the region, and the US has considered sending up to 120,000 troops to the region in case Iran attempts to make a serious move against US allies and military bases.