MiG-29K: Why Russia Is Sending This Dangerous Fighter to the Arctic 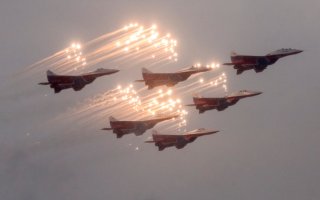 Since its introduction in the early 1980s, the Soviet Cold War-era Mikoyan MiG-29 has been widely exported and it has served in a variety of regions around the globe. Now the twin-engine combat aircraft, which was developed as an air superiority fighter in the 1970s, will be heading to the extreme conditions of the arctic for the first time.