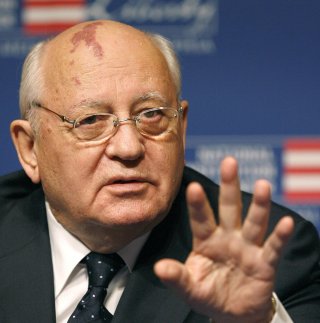 Mikhail Gorbachev, the final leader of the Soviet Union who oversaw a series of major reforms to its political and economic structure during the 1980s but was judged by many to bear the primary responsibility for its collapse, died on Tuesday at the age of ninety-one, according to Russia’s state-run RIA Novosti news network.

Gorbachev’s death was confirmed by the Central Clinical Hospital in Moscow, which indicated that the former Soviet leader had died “after a severe and prolonged illness.”

Gorbachev is best remembered in the West for allowing the Cold War to end by overseeing the largely peaceful dissolution of the Soviet Union from 1989 to 1991. The Soviet leader also signed a series of wide-ranging arms control agreements with U.S. presidents Ronald Reagan and George H.W. Bush, limiting both countries’ stockpiles of nuclear and chemical weapons. These efforts helped him win the Nobel Peace Prize in 1990 for “the leading role he played in the radical changes in East-West relations.”

Gorbachev was elected General Secretary of the Communist Party of the Soviet Union—the country’s de facto head of state—in 1985 at age fifty-four, making him roughly two decades younger than his predecessors Leonid Brezhnev, Yuri Andropov, and Konstantin Chernenko. Portraying himself as a young and energetic leader, Gorbachev pursued a series of political and economic reforms intended to revitalize the stagnant Soviet economy and allow for a measure of free expression. In his later years in office, he also sought to reorganize and decentralize the Soviet Union, granting greater authority to its constituent republics in eastern Europe and central Asia.

However, within six years of Gorbachev’s accession to office, the Soviet Union had dissolved under pressure from nationalist movements in the republics—many of which had been emboldened to speak out against Soviet rule following Gorbachev’s reforms. When nationalists in eastern Europe rose up against the Kremlin in 1989, Gorbachev opted not to suppress them with violence as earlier Soviet leaders had, reasoning that doing so could lead to further instability. However, Gorbachev’s inaction allowed the movements to gain strength, win local elections, and, based on the fiction that the Soviet Union had always been a voluntary union of participating nations, declare their independence from Moscow.

In August 1991, a group of hardline Soviet generals attempted to overthrow the government but backed down after Gorbachev and other Soviet leaders refused to endorse their actions. However, Gorbachev was overshadowed during the crisis by Russian nationalist politician Boris Yeltsin, who ultimately replaced him after the Soviet Union formally dissolved in December 1991.

After the Soviet Union’s dissolution, Russia and many of the former Soviet republics experienced a decade of severe economic hardship, leading to widespread hatred against Gorbachev within Russia. Russian leader Vladimir Putin claimed in 2005 that the Soviet collapse had been the “greatest geopolitical catastrophe of the twentieth century”—a statement that provoked controversy in the West but was agreed by many commentators to accurately reflect most Russians’ feelings.

In spite of this acrimony, however, Putin expressed his condolences to Gorbachev’s surviving family within hours of his death in an official telegram, according to Kremlin spokesman Dmitry Peskov.