Milley Doubles Down on Support for Ukraine Negotiations 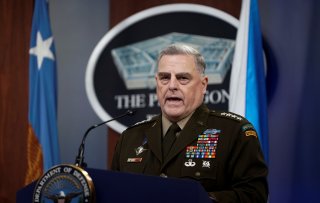 Chairman of the Joint Chiefs of Staff Gen. Mark A. Milley reiterated his case for a negotiated settlement to end the Russo-Ukrainian War at a press briefing this week.

Ukraine “did a tremendous job in defeating the Russian offensive,” Milley said, citing Kyiv’s battlefield successes in the northeastern Kharkiv and southern Kherson regions. “But Kherson and Kharkiv, physically, geographically, are relatively small compared to the whole [area of Russian occupation], so that—the military task of militarily kicking the Russians physically out of Ukraine is a very difficult task,” he added. “And it's not going to happen in the next couple of weeks unless the Russian army completely collapses, which is unlikely.” Milley argued that Ukraine is unlikely to achieve victory, defined as “kicking the Russians out of all of Ukraine” including Crimea, “anytime soon.”

Milley voiced the Biden administration’s position that it is “up to Ukraine to decide how and when or if they negotiate with the Russians” and that the U.S. will support Kyiv against the Russian invasion "as long as it takes,” but doubled down on his earlier suggestion that now is a good time for Ukraine to cement its gains at the negotiating table. “The Russian military is really hurting bad. So, you want to negotiate at a time when you're at your strength and your opponent is at weakness. And it's possible, maybe that there'll be a political solution. All I'm saying is there's a possibility for it. That's all I'm saying.”

Milley’s comments, which were made at a news conference alongside Defense Secretary Lloyd Austin, were an attempt to clarify remarks he made earlier this month at the Economic Club of New York. “When there’s an opportunity to negotiate, when peace can be achieved, seize it. Seize the moment,” he said, according to CNN, noting that an outright military victory for Ukraine remains out of reach and that the onset of winter provides an opportunity for renewed diplomatic efforts.

Valeriy Zaluzhny, commander-in-chief of Ukraine’s Armed Forces, told Milley in a phone call on Monday that Russia must withdraw its forces from all occupied territories before negotiations can take place. "I assured that we will fight as long as we have the strength,” Zaluzhny said in a readout of the call published by Ukrainian outlet Ukrinform. "Our goal is to liberate all Ukrainian land from Russian occupation. We will not stop on this path under any circumstances. The Ukrainian military will not accept any negotiations, agreements or compromise decisions. There is only one condition for negotiations—Russia must leave all captured territories.”