Missile-Killer, Sensor and Spy Plane: What Can't the F-35 Stealth Fighter Do? 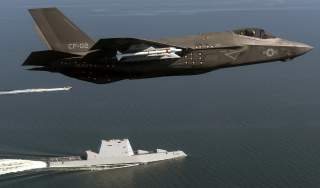 It was the latest test to underscore the radar-evading F-35’s ability to gather targeting information for other forces. The stealth fighter with its sophisticated radar and other sensors increasingly functions as a forward node in widespread military data networks.

The F-35 demonstrated its data-transmission capability to send data during the Orange Flag Evaluation 19-2 at Palmdale, California, and Fort Bliss, Texas.

The fighter sent “track data” -- presumably of a target aircraft or missile -- via its own dedicated ground relay station to an Army Integrated Air and Missile Defense Battle Command System ground station.

The Northrop Grumman-developed IBCS was able to “receive and develop fire-control-quality composite tracks during the exercise, leveraging the F-35 as an elevated sensor," Lockheed Martin, the builder of the F-35, claimed in a statement to Defense News.

The Army is developing the IBCS network as the major node in its air-defense network. The idea is for sensors in space, in the air and on the ground to feed data into the network. The network then would relay the data to “shooters” such as ground-based missile systems.

The June 2019 test wasn’t the first time the F-35 proved its potential as a sensor node. In 2014 a test plane carrying a copy of the F-35's infrared sensor tracked a rocket launch and transmitted the tracking data over the military’s Link-16 data network.

In 2016, a U.S. Marine Corps F-35 detected and tracked a missile and passed the data to a Navy Aegis missile-defense system. The Marine Corps proved, in a fall 2018 demonstration in Arizona, that an F-35 can pass targeting data to a rocket battery, improving its accuracy.

“While Lockheed’s F-35 Joint Strike Fighter was initially conceived of as a fighter-bomber, it’s become increasingly important in military planning as a high-tech scout,” Sydney Freedberg explained at Breaking Defense.

What joint commanders increasingly prize is the F-35’s ability to sneak into enemy air space using stealth, spot enemy forces using its advanced radar and infrared sensors, take all the data it gathers, make some sense of it and relay all that data back to other aircraft with larger bombloads, warships and even ground forces using hard-to-detect transmissions.

The Missile Defense Agency is particularly interested in using F-35s to spot — and potentially shoot down — enemy missile launches. The Air Force chief of staff, Gen. David Goldfein, has called the F-35 “a computer that happens to fly” and sees it as a central node in the joint ... network he’s determined to construct.

The F-35 itself would target enemy missiles, if the Pentagon had its way.

The F-35 "can track and destroy adversary cruise missiles today, and, in the future, can be equipped with a new or modified interceptor capable of shooting down adversary ballistic missiles in their boost phase,” according to the Pentagon's 2019 Missile Defense Review.

But the idea of an F-35 actually shooting down a just-launched rocket, in particular, a heavy ICBM, is "cray cray," Jeffrey Lewis, a nuclear expert at the Middlebury Institute of International Studies in California, told The National Interest.

The Advanced Medium-Range Air-to-Air Missile is the F-35's only long-range missile in U.S. service. The AMRAAM needs atmosphere in order to steer. So an F-35 would have to shoot down the missile before it climbs above 100,000 feet. That gives the pilot just a few minutes to detect and engage the rocket after it launches.

"This sets such a short timescale for detection and interception you’d have to be very close to the launch site," Laura Grego, a missile expert with the Massachusetts-based Union of Concerned Scientists, told The National Interest.

In its farthest-flying variant, the AMRAAM reportedly can travel around 90 miles. America's rivals such as North Korea launch their rockets from deep inside their own territory. "How do you get the F-35s in there safely?" Grego asked. "I think you would have to already be occupying North Korea to use it."