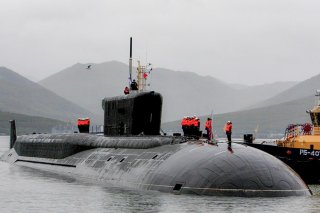 The Generalissimus Suvorov ballistic missile submarine (SSBN) was launched this week at Russia’s Sevmash Shipyard in the far-eastern city of Arkhangelsk, according to state news outlet TASS.

“This is our strategic argument. Nuclear submarine cruisers protect our country. […] I hope that the ‘Knyaz’ [submarine] family will accept the Generalissimus Suvorov as well. This submarine cruiser is planned to reinforce the Pacific Fleet submarine group," said Navy commander Nikolay Yevmenov, adding that the Russian navy has not commissioned this many submarines since 1991. Captain First Rank Viktor Artemov smashed a champagne bottle against the submarine’s hull, a common seafaring tradition. "We have a rather large commissioning plan for next year. I believe Sevmash will not let us down," Yevmenov said.

Generalissimus Suvorov’s launch comes just days after the induction of two more nuclear-powered submarines: the Borei-A SSBN Knyaz Oleg and Yasen-M Novosibirsk cruise missile submarine. As with Suvorov, both of those submarines were commissioned by the Pacific Fleet. The ceremony was attended via videoconference by Russian president Vladimir Putin. “We will step up our efforts to renovate the Navy, to build modern submarines and surface ships of various designs and classes, to simultaneously develop coastal infrastructure and, of course, to improve the social guarantees for military personnel and boost the prestige of military professions,” Putin said. Russia’s Borei-A and Yasen-M submarines will reportedly not make their way to the navy’s Black Sea and Baltic Fleets, as the latter two typically do not operate in oceans; all currently-planned models from the two new submarines classes will instead be distributed among the Northern and Pacific Fleets.

Laid down in late 2014, Generalissimus Suvorov is the third model of the Borei-A class of SSBNs. Borei-A is a further development of the original Borei line, formally introduced in 2012 with the K-535 Yuriy Dolgorukiy submarine. The Borei-A revision offers a lower acoustic signature for improved stealth performance and structural updates intended in part to boost maneuverability.

The Borei-class displaces 24,000 tons submerged and offers a top speed of 33 knots, making it markedly lighter and faster than its Typhoon-class predecessor. The Borei submarines will be armed with sixteen new RSM-56 Bulava submarine-launched ballistic missiles (SLBM’s). Bulava’s full specifications have not yet been confirmed, with prior reports indicating an operational range of up to 9,000 kilometers. The Bulava missile is expected to feature at least six Multiple Independently Targetable Re-entry Vehicles (MIRVs) with a yield of 150 kilotons, a vast improvement over its Soviet-era R-39 Rif predecessor.

Four more Borei-A submarines are in varying stages of construction and are slated to be commissioned through 2027.