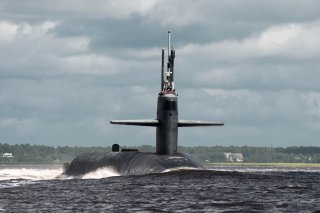 The upgraded MK 48 Mod 7 torpedo variant will arm the U.S. Navy’s Columbia-class nuclear-powered ballistic missile submarines with a longer-range, more lethal, and more capable conventional weapon. While lesser recognized than the Columbia’s nuclear-capable ballistic missiles, the MK 48 adds substantial new dimensions to the boat’s lethality and mission scope. The first Columbia-class submarine, the USS District of Columbia, will be armed with MK 48 torpedoes, according to a recently published Naval Sea Systems Command report.

At the same time, the upgraded MK 48 torpedo is also introducing paradigm-changing “quieting” technologies to help ensure the highly secretive Columbia-class submarines remain undetected while at sea. The upgraded variant of the U.S. Navy’s MK 48 Torpedo has some stealthy characteristics.

An earlier version, the MK 48 Mod 6, has been operational since 1997 while the more recent Mod 7 has been in service since 2006. Since that time, Lockheed Martin has been working on upgrades to the MK 48 torpedo Mod 6 and Mod 7 which consist of adjustments to the guidance control box, broadband sonar acoustic receiver, and amplifier components.

“The latest version of the Mk 48 ADCAP (advanced capability) is the mod 7 Common Broadband Advanced Sonar System. The Mk 48 ADCAP mod 7 CBASS torpedo is the result of a Joint Development Program with the Royal Australian Navy and achieved initial operational capability in 2006,” a spokesman with Naval Sea Systems Command told The National Interest several years ago during an early phase of its development.

The Common Broadband Advanced Sonar System (CBASS) is a system of electronics that are placed into the nose of the weapon as part of its guidance section, Lockheed Martin and U.S. Navy developers explained.

CBASS technology provides streamlined targeting, quieter propulsion capabilities, and the ability to operate with improved effectiveness in shallow and deep water. Also, the Mod 7 decreases the weapon’s vulnerability to enemy countermeasures and allows the torpedo to transmit and receive over a wider frequency band, Lockheed Martin and U.S. Navy developers said.

The new technology also involves adjustments to the electronic circuitry to allow the torpedo to better operate in an undersea environment.

Modifications to the weapon have improved the acoustic receiver, replaced the guidance-and-control hardware with updated technology, increased its memory, and improved processor power throughout to handle the expanded software demands required to improve the torpedo’s performance against evolving threats, according to U.S. Navy data on the weapon.

Working in tandem with surface-ship anti-submarine and surface warfare systems, attack submarines with a more capable torpedo could better identify and attack enemy targets near coastal areas and shallow water.