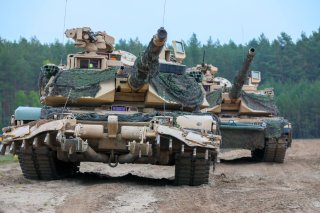 The U.S. Army made a decision on the long-anticipated Mobile Protected Firepower (MPF) program, a project that seeks to give the Army a light tank. General Dynamics Land Systems earned a $1.14 billion award for ninety-six MPF units.

“The MPF program did exactly what the Army asked, which was to complete a competitive and accelerated rapid prototyping effort with Soldier touchpoints,” said Doug Bush, assistant secretary of the Army for acquisition, logistics and technology, in the Army’s statement announcing the award.

“MPF is a benchmark program, as the acquisition and requirement communities worked together to complete the [middle-tier acquisition rapid-prototyping] phase and move this system into production in just under four years,” Bush said.

General Dynamics’ entry into the Army’s Mobile Protected Firepower competition is based on the company’s Griffin II, which is essentially a light tank fitted with a 105mm turret gun. While this main gun fires smaller-diameter ammunition than the Abrams main battle tank—a 120mm round—the vehicle could offer the Army greater logistical ease considering the vehicle’s much lower curb weight.

“MPF represents a new capability for the Army, allowing our light maneuver forces to overmatch adversaries. Through multiple Soldier touchpoints, our Soldiers have operated the prototypes and provided crucial feedback to the design team, ensuring our forces will have the asset they need on the future battlefield,” said Maj. Gen. Ross Coffman, director of the Next Generation Combat Vehicles Cross-Functional Team.

The acquisition of General Dynamics’ vehicle marks the first time in almost forty years that the U.S. Army has acquired a new vehicle. And, as General Dynamics builds the Army’s current tank, the Abrams, it is a significant win for the company.

“Congress has provided us with flexible [middle-tier acquisition] legislation that allows for accelerated prototype delivery and Soldier operational feedback, which expedites the fidelity on technical and programmatic risks to better inform program acquisition decisions,” Bush said.

“Today’s announcement sets in motion an important modernization effort for the Army. As a team we’ve worked diligently to make certain we’ve taken the right steps early on to accept risk where appropriate and move faster,” said Brig. Gen. Glenn Dean, the Office of the Assistant Secretary of the Army for Acquisition, Logistics and Technology’s program executive officer for ground combat systems.

“The Army is committed to delivering the MPF capability to the infantry brigade on an accelerated schedule with incremental improvements over time,” Dean added.

While General Dynamic’s vehicle is unlikely to change significantly, later models could incorporate incremental improvements to the platform.