Is the Mobile Protected Firepower a Light Tank? The Army Says ‘No’ 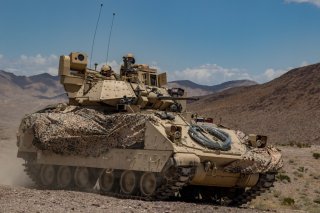 The new maker of the U.S. Army’s Mobile Protected Firepower (MPF) vehicle is the same company that produces the classic Abrams tank. Yet, the MPF vehicle developer, General Dynamics Land Systems (GDLS), is clear that the new platform is not a light tank.

The U.S. Army shares this view, as officials have said the new MPF should not be thought of as a light tank given that it is engineered for an entirely different mission scope and operational purpose. Some of the specific technical elements of the MPF, and the innovations woven into the design by GDLS, indicate that the MPF is an entirely different vehicle.

While explaining some of the technical elements of the GDLS vehicle, Tim Reese, director of business development, General Dynamics Land Systems, made remarks which fully align with the U.S. Army’s thinking.

Reese explained that the suspension of the vehicle, the high horsepower weight to horsepower ratio, and the front-mounted diesel engine make the MPF architecture quite different from a standard tank. Additionally, while an Abrams can only fire a 120mm cannon, the MPF is built with a modular turret so that it can switch to a heavier cannon to meet different mission requirements. The MPF is also built with a newly designed slip ring for added networking, data management, and information exchange between the hull and the turret.

The entire operational concept for why the MPF is needed is due in large measure to a need to fill a combat need the Abrams is unable to. For example, an Abrams cannot pass through narrow passageways alongside dismounted infantry, cross certain bridges, or drop from an airplane. While the classic heavy tank has likely etched its role in future warfare for decades to come, there are many crucial tactical missions that the Abrams simply cannot perform.

An MPF will be relevant for future warfare missions since it is expected to operate at a faster pace, driven by high-speed information flows and operational quickness. This is why the MPF, while certainly drawing from successful elements of previous armored vehicle construction, is by no means a light tank.

Given the increasing need for on-board electrical power, the GDLS MPF is built with a newly designed slip ring to accommodate additional data capacity between the hull and the turret.

“The turret spins around into a hull, not a fixed point where wires are. The slip ring is a mechanical device that allows you to transfer data and operate under all conditions,” Reese said.