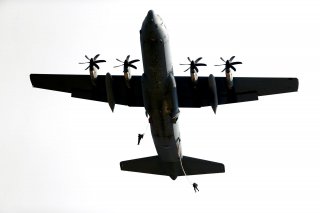 The Lockheed Martin C-130J won't be taking to the air over the Big Sky state anytime soon it seems. While the Montana Air National Guard (MANG) had been among eight finalists named earlier this year to receive the new turboprop transport aircraft to replace its aging C-130H fleet, the Department of the Air Force has opted not to go forward with the upgrade at this time due to budget constraints.

Both of Montana's U.S. Senators have been critical of the recent decision, but even before it was announced last week, Democratic Senator Jon Tester had called out President Donald Trump, and earlier this year suggested that the C-130J funding shouldn't have been reduced. Tester complained that the money that could have been spent upgrading the Air National Guard's transport fleet had been redirected towards what he called "an ineffective border wall."

Tester, who is a member of the Senate Appropriations Committee, had met with the men and women of MANG's 120th Airlift Wing in Great Falls in March to discuss the need to secure the aircraft, and said at the time that the decision not to upgrade the entire fleet of the C-130 aircraft could potentially jeopardize the safety, readiness, and effectiveness of the U.S. military.

After the Department of the Air Force's decision was announced in late November, Tester wrote to Air Force Secretary Barbara Barrett stating, "I am concerned that, rather than prioritizing utility for the Air Force or cost-effectiveness, politics played a significant role in this process."

He added, "I ask that the Air Force provide a full and open accounting to Congress of all potential locations for this basing decision, the costs associated with basing at those potential locations, and a thorough explanation of the utility that new C-130J aircraft would provide to each location and to the overall mission of the Air Force. Additionally, I ask that the Air Force provide to Congress an examination of this decision-making process, to make transparent what factors weighed more heavily than others in this decision. This criteria is important to establish public faith that these decisions were made solely based on our national security interests."

"I was disappointed by the Pentagon's decision to not upgrade Montana's aging C-130 fleet, which asks more of Montana's exceptional Airmen than other states," Daines said via a statement. "However, I am convinced that Great Falls is the best location for the Aeromedical Evacuation Squadron and I remain committed to working with Air Force leadership to secure this additional upgrade for Montana's Airmen."

The Lockheed C-130 Hercules first entered service with the U.S. military in 1956, and it has been the longest continuously produced military aircraft for over sixty years. The upgraded C-130H variant isn't actually much younger. It first entered service in March 1965 and while more than 1,200 were produced, many of the aircraft in service with National Guard units are now far older than any of the crews that serve aboard the planes.

Thanks to numerous updates and improvements of the platform, the C-130 has continued to set the world standard for tactical airlift needs. The most recent variant is the C-130J Super Hercules, which offers superior performance and enhanced capabilities, along with the range and flexibility for every theater of operations and even evolving requirements. To date, sixteen countries operate or will operate the C-130J, and the platform has been used to set fifty-four world aviation records.

The Air Force has taken a significant step toward flying its historic C-130 cargo planes well into the 2030s or beyond with the delivery of its final, upgraded C-130J airplane. This latest version of the venerable aircraft features state-of-the-art technology, which reduces manpower requirements, lowers operating and support costs, and provides life-cycle cost savings over earlier C-130 models. Compared to older C-130s, the J model climbs faster and higher, flies farther at a higher cruise speed, and takes off and lands in a shorter distance. The C-130J-30 is a stretch version, adding 15 feet to the fuselage, increasing usable space in the cargo compartment.

It could be a while before MANG gets to fly any of these aircraft, but it is easy to see why both of the state's U.S. Senators feel disappointed the C-130J won't be in the big skies over Montana.