More Than 140 Killed by Bridge Collapse in India 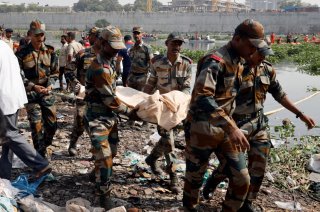 More than 140 people—many of whom were children, women, and the elderly—were killed on Sunday evening after a 750-foot-long pedestrian bridge collapsed in the western Indian state of Gujarat, the New York Times reported.

According to Brijesh Merja, a minister in the Gujarat government, roughly 350 people were on and around the bridge, a major tourist attraction, during the time of the incident. By Monday, the large-scale rescue operation was being scaled down as hopes faded of more survivors being found.

According to a report from BBC News, a young man told the news outlet that he had been searching for his six-year-old sister since Sunday night.

“I was holding her hand when the bridge collapsed and we fell into the river,” he said. “I survived and have been looking for her everywhere. I went to the government hospital also, but my sister is nowhere to be found.”

Prateek Vasava, who was able to swim to a river bank after the collapse, said that he saw several children fall into the river. “I wanted to pull some of them along with me but they had drowned or got swept away,” he told a local news station, per BBC.

Gujarat Home Minister Harsh Sanghavi on Monday said that the state has lodged a criminal complaint against the agency that was in charge of the maintenance of the bridge that was built in the nineteenth century and reopened last week after renovations.

Mallikarjun Kharge, leader of the opposition Congress party, demanded an investigation to find out how the bridge collapsed within just “five to six days” of being reopened.

Meanwhile, according to Indian prime minister Narendra Modi, the families of the victims will receive compensation from the National Relief Fund.

“My heart is filled with love and is with the families of those suffering,” he said on Monday during a campaign event ahead of a state-level election in Gujarat.

“The state government has set up a committee to investigate the incident. I assure the people of the country that there will be nothing lacking in the relief and rescue efforts,” he continued.

Per CNN, Gujarat chief minister Bhupendra Patel said that the state government would provide the equivalent of about $5,000 in compensation per family of the deceased and about $600 each for the injured.

“I express my condolences to the families of the citizens who lost their lives in the tragedy,” he wrote on Twitter.