More F-35s Are Headed to This NATO Member 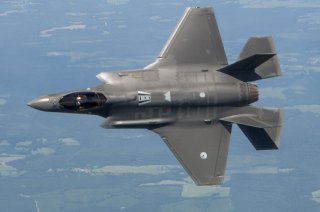 The additional F-35s will help the Dutch air force to reequip an additional front-line fighter squadron.

The decision partially restores deep cuts to the Dutch fighter fleet that began at the end of the Cold War and continued through the 2008 global financial crisis. Today the RNLAF operates around 60 F-16s in three front-line squadrons and one training unit.

At its peak in the late 1980s, the Dutch F-16 fleet included more than 200 airframes, making it one of Europe’s most powerful fighter forces.

The Netherlands is a major partner in the U.S.-led F-35 program and originally planned to acquire 114 of the radar-evading warplanes to fully replace the F-16 fleet. But the country’s defense budget shrank and the F-35’s cost rose.

Amsterdam in 2013 budgeted just $6 billion to buy 37 F-35s, enough to equip two F-16 squadrons plus the training unit. Critics pointed out that 37 fighters would be sufficient to support long-term deployments of just a handful of aircraft.

“Because pilots are also busy with training and surveillance of Dutch airspace, only four aircraft could be permanently on a foreign mission,” Dutch newspaper Trouw reported. “Should an [F-35] crash, even that limited assignment would be difficult.”

The first operational F-35 arrived in The Netherlands in January 2019. Deliveries of the initial F-35s should continue through 2023. Most of the Dutch F-35s are coming from the program’s Italy-based factory. There are several F-35 production lines, with the biggest being the American one in Texas.

The RNLAF expects to declare full operating capability with the F-35 in 2024. As a level-two partner in the F-35 program, The Netherlands will serve as a sustainment hub for the maintenance, overhaul and upgrade of European F-35s.

The RNLAF got a reprieve in late 2018 when the government announced it would attempt to acquire another 15 F-35s in order to equip the third front-line F-16 squadron and roughly preserve the current fighter force structure.

A spring 2019 memorandum from the federal government added $1.7 billion to the military budget through 2024. Bijleveld said that would fund the acquisition of eight or nine F-35s, depending on the exchange rate with the dollar at the time of the purchase.

Bijleveld said the RNLAF would need more money starting in 2020 to buy the balance of the 15 extra F-35s the government said it would acquire. If the money is forthcoming, the RNLAF could operate 52 F-35s in three front-line squadrons as early as the mid-2020s.

The Dutch military’s cash windfall benefits the army and navy, too. The navy plans to install additional missile-defenses on some of its ships, while the army intends to acquire more tanks and artillery to begin growing ground forces that, like the air force, suffered deep cuts in recent years.

The Dutch defense ministry also announced that it would re-open De Peel air force base for flying activities. In recent years, the base has hosted an air-defense missile unit but no aircraft.

“Expecting extra exercises with the F-35 and helicopters, the air force needs more space,” Trouw reported. “From 2021, De Peel would then be available to fly, among other things, 18 fighter jets a year there.”

The RNLAF fighter fleet is growing again, albeit slowly. But other Western air arms continue to shrink. The Royal Air Force in mid-2019 operates just 119 fighters, the lowest number in its history.

In early 2019 the Swiss air force was down to just 10 ready fighters with full-time pilots.

Belgium meanwhile is buying 34 F-35s for $4 billion to replace 56 F-16s. The Belgian air force expects just five F-35s to be deployable at any given time.