More Than Rockets: What Is Hamas’ New Strategy Against Israel? 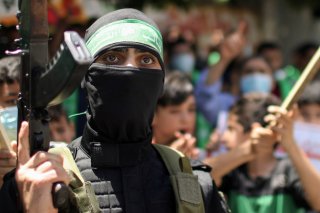 Traditionally, Palestinian armed groups have tried to defeat Israel from without by waging war against it. However, Hamas’ recent strategy has shifted its target from without to within. This includes domestic and international pressure to change the political landscape within Israel; a fresh and radical new strategy that relies on increasing the scale of Israeli attacks on Palestine. By exploiting tweets and updates on social media to undermine Israel’s image, Hamas is changing the narrative behind the conflict to achieve victory.

As an inferior force with comparatively little resources and allies, Hamas has understood that the traditional crusade strategy is trivial and outdated. Forming a coalition of Arab states to military defeat Israel and “liberate” Palestine has proven futile over the last century—despite multiple attempts. Now, with multiple Arab states having established relations with Israel, and Israel possessing one of the world’s most powerful militaries, Hamas understands that defeating Israel on its own terms is suicide.

But Hamas’ rocket barrages have made Israel seem vulnerable; debates about the Iron Dome have resurfaced. When Israel retaliates against Hamas, it is then condemned for human rights violations, bringing the Palestinian cause further support among prominent international actors to recognize the state of Palestine. Modern communication technology has made it possible to convince your enemy rather than impose your beliefs on them.

Currently, individual tweets have more global reach than most renowned newspapers, giving Hamas leverage on the international scene. There are 1.5 billion Muslims in the world with the overwhelming majority of them sympathetic to Palestine. In fact, the tyranny of the majority makes it embarrassing for one in a Muslim society to support Israel on social media.

For instance, Hamas increased its attacks on May 10, Israel’s Jerusalem Day. The day commemorates the reunification of Jerusalem and the establishment of Israeli control over the city. By promoting stories that Palestinian organizations attack Israel only because the government of Israel attacks them, Palestinians may be able to convince a significant portion of Israelis to choose a peace-friendly government.

However, this story comes at a cost. In under five minutes, Hamas fired 137 rockets at Ashkelon, more rockets than were fired at Israel than in all of 2020, in an effort to overwhelm the Israeli Iron Dome missile defense system. Estimates suggest that Palestinian organizations have fired about 5,000 rockets at Israel in just ten days, an equivalent number to those fired over almost the last ten years.

The strategy depends on scale. Firing large numbers of rockets at once will overwhelm the Israeli defense system, allowing some rockets to hit their targets. Considering Hamas’ strategy is about conviction, not military victory, creating the psychological feeling that Israel is vulnerable is enough. Bypassing the world-renowned Iron Dome will raise questions about Israel’s security, despite that the Palestinians know they can’t defeat Israel.

Even if most of Hamas’ rockets hit their targets, Palestinians still would not be able to liberate a single town. Palestinians lack any ability to directly confront the Israeli Defense forces, let alone hold territory. Therefore, Hamas is working to effect perception rather than facts on the ground.

Hamas has also changed its targets from small-scale targets like military vehicles to critical infrastructure such as oil pipelines. It has fired rockets towards Israel’s gas installations in the Mediterranean since the conflict began. Israel is largely dependent on the Mediterranean with more than 90 percent of its imports via the Mediterranean.

Moreover, Israel has a small navy that is tasked with protecting a large maritime territory. Hamas’ naval capabilities have grown over the years to include autonomous submarines and explosive commando ships that have attacked Israeli installations in the Mediterranean, lending credibility to the impression that Israel is from Palestinians on multiple fronts. The image of hundreds of rockets over Jerusalem and Tel Aviv has changed Israelis' perception of their security. Israel’s defense minister stated that if the Israelis have nowhere to sleep, they will raze the Gaza strip. This is testimony that Hamas’ strategy works: the group is changing Israeli security perceptions about their government.

Israeli politics has recently faced many uncertainties. No party could secure enough seats in the recent elections and Prime Minister Benjamin Netanyahu has been stuck in a quagmire in trying to form a government. Netanyahu is known as Mr. Security, a name that has now been put at stake. His achievements have been invaluable for Israel—including establishing relations with powerful and prominent Sunni Arab states plus signing the Abraham accords—yet he has failed to garner a political majority.

By firing an unprecedented number of rockets, Palestinians have caused the collapse of an alliance between opposition parties, including an Arab party, to form a government. Amid the uncertainties, the prospect for another government seems dim. Dividing a democratic state like Israel across ethnic lines will set it back years. This also makes an alliance between the Left and Right almost impossible. Thus, Palestinians have been able to change Israeli politics, a political triumph attained with relatively tiny resources.

Prospects for another election seem high and with the recent tensions, security will dominate the election agenda. Even though the attacks might empower right-wing parties in the coming elections, the attacks prove that after twelve years of having Netanyahu in office, despite all of his accomplishments, Israel still finds itself vulnerable to a small militant group. Voters might realize that only friendship with Palestine, not powerful Arab states, can truly secure Israel. They may prefer a leftist or centrist party in the long term, if not in the short. That would be the ultimate triumph for Palestine.

Anti-Israel protests all over the world, especially in neighboring Lebanon and Jordan, are alarming to Israel. The possibility of pro-Iranian groups in these states intervening to “save” Jerusalem is high. Therefore, Israeli policymakers will find themselves in a difficult position. Although Israeli policymakers believed that normalizing relations with Sunni Arab states will lead the Palestinian organizations to wither away, recent attacks have proven otherwise. The two-state solution remains the most conspicuous and internationally supported solution.

Farhang Faraydoon Namdar is a researcher and journalist covering the Middle East, he was the former Editor in Chief of Birst Newspaper. He has translated books and articles including Fukuyama’s State Building: Governance and World Order in the 21st Century into Kurdish. Currently, he is a researcher at Gorran Movement/Iraq.